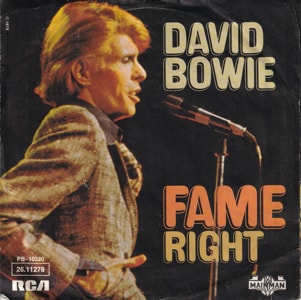 “Fame” is a song recorded by English singer-songwriter David Bowie. It was released on his 1975 album Young Americans and was later issued as the album’s second single by RCA Records in July 1975. Written by Bowie, Carlos Alomar and former Beatle John Lennon, it was recorded at Electric Lady Studios in New York City in January 1975. It is a funk rock song that represents Bowie’s (and Lennon’s) dissatisfaction with the troubles of fame and stardom.

The story behind ‘Fame’

While mixing the Young Americans album in New York during January 1975, Bowie summoned members of his tour band for an impromptu recording session with John Lennon at Electric Lady studios. After taping ‘Across The Universe’, the band renewed their attempts to lay down a studio version of The Flares’ ‘Foot Stomping’, a staple in the previous autumn’s tour repertoire. However, the song which had worked so well in concert and during an appearance on the Dick Cavett show proved lacklustre in the studio, and Bowie elected instead to discard ‘Foot Stomping’ and salvage the guitar riff created by Carlos Alomar.

According to Alomar, “David recorded my chord changes and riff, and he hated it. He took out the lyrics and ended up with the music and cut it up on the master so that it would have classic R&B form. He’s a perfectionist and experiments with the original tape, running it backwards, cutting it up, doing things on the master as opposed to recording them live. ‘Fame’ was totally cut up. When he had the form of the song he wanted, he left. I stayed behind and overdubbed four or five different guitar parts on it. He listened to it and said, ‘That’s it’.”

Bowie would later question Alomar’s recollection of multiple guitar overdubs: “Carlos’s memory is a little off here,” he revealed in 2006. “Tony Visconti took the tapes to a studio for the 5.1 mix last year and found that Carlos had only overdubbed one extra guitar. The other electric guitar which makes the long ‘Wah’ and the echoed ‘Bomp!’ sound was played by myself, and John Lennon played the acoustic. John supervised the backwards piano on the front. I also spent several hours creating the end section.”

Like many of the Bowie classics, ‘Fame’ was clearly the product of a happy collision of accidents and methodologies. John Lennon later suggested in 1980 that “We took some Stevie Wonder middle eight and did it backwards, you know, and we made a record out of it! I like that track.”

“With John Lennon in the studio it was more the influence of having him that helped,” said Bowie. “There’s always a lot of adrenalin flowing when John is around, but his chief addition to it all was the high-pitched singing of ‘Fame!’ The riff came from Carlos and the melody and most of the lyrics came from me. But it wouldn’t have happened if John hadn’t been there. He was the energy, and that’s why he got a credit for writing it. He was the inspiration.”

‘Fame’ sums up Bowie’s (and indeed Lennon’s) very immediate disaffection with the trappings of stardom: money-grabbing managers, mindless adulation, unwanted entourages and the hollow vacuity of the limousine lifestyle. Having spent most of 1974 simultaneously touring America and fighting with his manager Tony DeFries over control of his finances and career, David was singing from the heart. There’s nothing abstract about lines like “what you need you have to borrow”, which precisely articulate David’s predicament in the dying days of the MainMan empire.

David Bowie’s handwritten lyrics for ‘Fame’
“There was a degree of malice,” Bowie later agreed. “I’d had very upsetting management problems and a lot of that was built into the song.” On another occasion he recalled that he and Lennon had “spent hours talking about fame, and what it’s like not having a life of your own any more. How much you want to be known before you are, and then when you are, how much you want the reverse: ‘I don’t want to do these interviews! I don’t want to have these photographs taken!’ We wondered how that slow change takes place, and why it isn’t everything it should have been. I guess it was inevitable that the subject matter of the song would be about the subject matter of those conversations.”

Despite its intensely personal nature, Bowie was initially unenthusiastic about ‘Fame’. “That was my least favourite track on the album,” he recalled in 1990, “even though John had contributed to it and everything, and I had no idea, as with ‘Let’s Dance’, that that was what a commercial single is. I haven’t got a clue when it comes to singles. I just don’t know about them, I don’t get it, and ‘Fame’ was really out of left-field for me.”

Ironically, ‘Fame’ was the Bowie single that finally broke America and propelled him into the full glare of Stateside celebrity. It became a US number 1 in the summer of 1975 before he had ever topped the chart in his home country, where the single managed a more modest number 17.

The 3’30” single edit has only appeared on one compilation to date, 1980’ s The Best Of Bowie, and the so-called “original single edit” released as a 7” picture disc in 2015 is a new and inauthentic creation). Two early studio mixes, timing at 3’53” and 4’17” respectively and both distinguished by a prominent flute line possibly played by backing singer and multi-instrumentalist Jean Fineberg, have appeared on bootlegs.

On 4 November 1975 Bowie gave a mimed performance of ‘Fame’, together with his latest single ‘Golden Years’, on ABC TV’s Soul Train. A fortnight later on November 23 he performed the song again (this time with a live vocal and a sax-heavy backing mix) on CBS’s The Cher Show. This clip, shot against a backdrop of twinkling Vegas lights, would subsequently become the unofficial “video” for ‘Fame’, despite being shot a good two months after the single’s chart success.

In January 1976 James Brown, one of Bowie’s boyhood idols, released a single called ‘Hot’ – followed two months later by an album of the same name – which was a blatant and un-sanctioned cover of ‘Fame’ with a few different lyrics. Apparently Bowie was flattered to have his work recorded by one of his heroes, yet at the same time dismayed by what he considered plagiarism; according to Carlos Alomar, he decided that “If it charts, then we’ll sue him.” However, in common with many of Brown’s mid-1970s offerings ‘Hot’ failed to chart, and all was forgotten.