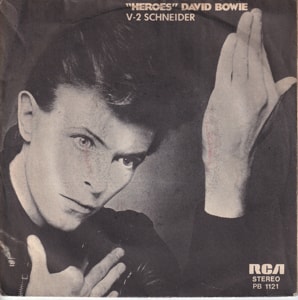 “”Heroes”” was recorded in July and August 1977, and released on 23 September 1977. A product of Bowie’s “Berlin” period, the track was not a huge hit in the UK or US at the time, but has gone on to become one of Bowie’s signature songs. In January 2016, following Bowie’s death, the song reached a new peak of number 12 in the UK Singles Chart. “”Heroes”” has been cited as Bowie’s second-most covered song after “Rebel Rebel”.

Inspiration and recording
The title of the song is a reference to the 1975 track “Hero” by German krautrock band Neu!, whom Bowie and Eno admired. It was one of the early tracks recorded during the album sessions, but remained an instrumental until towards the end of production. The quotation marks in the title of the song, a deliberate affectation, were designed to impart an ironic quality on the otherwise highly romantic, even triumphant, words and music. Producer Tony Visconti took credit for inspiring the image of the lovers kissing “by the wall”, when he and backing vocalist Antonia Maass (Maaß) embraced in front of Bowie as he looked out of the Hansa Studio window. Bowie’s habit in the period following the song’s release was to say that the protagonists were based on an anonymous young couple but Visconti, who was married to Mary Hopkin at the time, contends that Bowie was protecting him and his affair with Maass. Bowie confirmed this in 2003.

The music, co-written by Bowie and Eno, has been likened to a Wall of Sound production, an undulating juggernaut of guitars, percussion and synthesizers. Eno has said that musically the piece always “sounded grand and heroic” and that he had “that very word – heroes – in my mind” even before Bowie wrote the lyrics. The basic backing track on the recording consists of a conventional arrangement of piano, bass guitar, rhythm guitar and drums. However the remaining instrumental additions are highly distinctive. These largely consist of synthesizer parts by Eno using an EMS VCS3 to produce detuned low-frequency drones, with the beat frequencies from the three oscillators producing a juddering effect. In addition, King Crimson guitarist Robert Fripp generated an unusual sustained sound by allowing his guitar to feed back and sitting at different positions in the room to alter the pitch of the feedback (pitched feedback). Tony Visconti rigged up a system, a creative misuse of gating that may be termed “multi-latch gating”, of three microphones to capture the vocal, with one microphone nine inches from Bowie, one 20 feet away and one 50 feet away. As the music built, Bowie was forced to sing at increased volumes to overcome the gating effect, leading to an increasingly unhinged vocal performance as the song progresses Each microphone is muted as the next one is triggered. “Bowie’s performance thus grows in intensity precisely as ever more ambience infuses his delivery until, by the final verse, he has to shout just to be heard….The more Bowie shouts just to be heard, in fact, the further back in the mix Visconti’s multi-latch system pushes his vocal tracks, creating a stark metaphor for the situation of Bowie’s doomed lovers”.

Release and aftermath
“”Heroes”” was released in a variety of languages and lengths (“a collector’s wet dream” in the words of NME editors Roy Carr and Charles Shaar Murray). In contrast to the bewildering audio situation, the video (directed by Stanley Dorfman) was a stark and simple affair, the singer captured performing the song in what appeared to be a single take with multiple cameras, swaying in front of a spotlight that created a monotone and near-silhouette effect. Despite a large promotional push, including Bowie’s first live Top of the Pops appearance since 1973, “”Heroes”” only reached number 24 in the UK charts, and failed to make the US Billboard Hot 100.

In Italy, the song was certified gold by the Federation of the Italian Music Industry.

Writing for NME on its release, Charlie Gillett slated the record saying: “Well he had a pretty good run for our money, for a guy who was no singer. But I think his time has been and gone, and this just sounds weary. Then again, maybe the ponderous heavy riff will be absorbed on the radio, and the monotonous feel may just be hypnotic enough to drag people into buying it. I hope not.”

Later assessments were more favourable. In February 1999, Q Magazine listed “”Heroes”” as one of the 100 greatest singles of all time as voted by the readers. In March 2005, the same magazine placed it at number 56 in its list of the 100 Greatest Guitar Tracks. In 2004, Rolling Stone rated “”Heroes”” number 46 in its list of The 500 Greatest Songs of All Time. It was included in 2008’s The Pitchfork Media 500: Our Guide to the Greatest Songs from Punk to the Present. John J. Miller of National Review rated “”Heroes”” number 21 on a list of “the 50 greatest conservative rock songs” due to its anti-Soviet political context, despite its status as a gay anthem. Uncut placed “”Heroes”” as number 1 in its 30 greatest Bowie songs in 2008.

Moby has said that “”Heroes”” is one of his favourite songs ever written, calling it “inevitable” that his music would be influenced by the song, and Dave Gahan, lead singer for Depeche Mode, was hired into the band when band founder Vince Clarke heard him singing “”Heroes”” at a jam session.

Bowie regularly performed the song in concert. It was used in Chris Petit’s film Radio On two years after its release. The song has become a mainstay of advertising in recent years, gracing efforts by Microsoft, Kodak, CGU Insurance, HBO Olé (HBO Latin America) and various sporting promoters throughout the world. It was also used as the intro to the video game NHL 99, released in 1998. “”Heroes”” also appears as downloadable content in the music video game series Rock Band in a three-song pack along with other Bowie songs “Moonage Daydream” and “Queen Bitch”. The Australian television mockumentary We Can Be Heroes: Finding The Australian of the Year (title outside Australia: The Nominees) took its title from “”Heroes””. A cover of the single was used as ITV’s theme song for its coverage of the 2006 FIFA World Cup.

The song was played during the party scene in the 2001 film Antitrust. In 2009, the song was played over the closing credits of both the documentary The Cove, and What Goes Up, and also featured in that film, important to the plot’s message.

In May 2010, the song was played over the extended closing credits of the final episode of Ashes to Ashes, in keeping with the various David Bowie allusions throughout that series (and its predecessor Life on Mars).

In 2012 the track was played as athletes from Great Britain entered the Olympic Stadium during the 2012 Summer Olympics opening ceremony, and after medal ceremonies during the Olympics. It was also used as the Great Britain Paralympic team entered the stadium during the opening ceremony on 29 August 2012. The same year, it was featured in the film The Perks of Being a Wallflower.[31] First heard on a pick-up truck radio by the main characters, the song is important to both “flying through the tunnel” scenes and played over the closing credits.

In 2013, the song was featured in the Daniel Radcliffe horror fantasy film, Horns.

In 2014, the song was featured in the premiere trailer for the Brazilian film Praia do Futuro. The song was also played in “You Don’t Have to Live Like a Referee”, an episode of The Simpsons as Lisa is trying to figure out how to make Homer into a hero for a speech contest at school.

In the days following Bowie’s death in January 2016, the song was streamed on Spotify more than any other Bowie song. On Twitter the German Foreign Office paid homage to Bowie for “helping to bring down the wall.” It reached a new peak of number 12 in the UK after Bowie’s death.

Live versions
Prior to the single release of “”Heroes””, Bowie first performed the song on the final episode of friend Marc Bolan’s Granada Television series Marc (filmed 7 September 1977, broadcast 20 September 1977 – after Bolan’s funeral). This particular version has an alternate backing track that was recorded with Bolan playing lead guitar and the T.Rex line up of Dino Dines on keyboards, and the rhythm section of Herbie Flowers on bass and Tony Newman on drums. Coincidentally, prior to joining T.Rex, Flowers and Newman were a part of Bowie’s rhythm section on the Diamond Dogs album and its tour, documented on the live album David Live.
Bowie performed the song when he appeared on Bing Crosby’s 1977 Christmas TV special, Bing Crosby’s Merrie Olde Christmas. In the performance, filmed on 11 September 1977, Bowie sang over a prerecorded backing track.

A concert performance recorded in the spring of 1978 was released on the live album Stage.

The rendition at Live Aid in 1985 has been described as “the best version of “”Heroes”” [Bowie] had ever sung”. This performance featured Thomas Dolby on keyboards.

Bowie performed the song live on his 1987 Glass Spider Tour, as seen in the 1988 concert video, Glass Spider.

The song was performed at the Freddie Mercury Tribute Concert in 1992 by Bowie, Mick Ronson and John Deacon, Roger Taylor, and Brian May – the surviving members of Queen.

An acoustic version of the song was played in 1996 at The Bridge School Benefit Concert at the Shoreline Amphitheater in Mountain View, California, and later released on The Bridge School Benefit Concert album.
The song was performed by Bowie at The Concert for New York City on 20 October 2001.
Bowie performed the song live during his 2003 Reality Tour, and a performance from November of that year was released on the A Reality Tour DVD in 2004, and included on the A Reality Tour album, released in 2010.