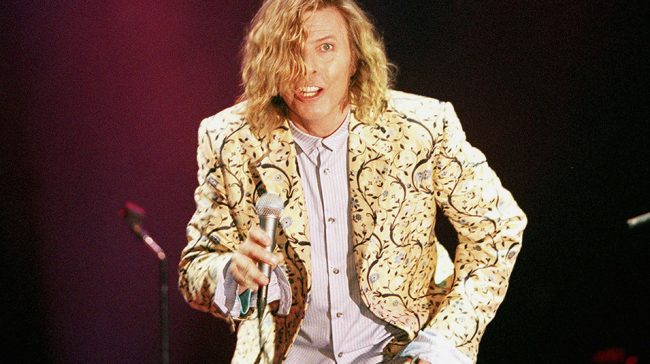 It seems the internet will never run out of wonderful David Bowie treats – and we are totally down with that. A 25-minute audio clip of a rehearsal from his 1995 ‘Outside’ tour, which promoted the album of the same name, has now emerged on Soundcloud.

This period was something of an oddity for Bowie, who had reunited with Berlin trilogy co-producer Brian Eno for the album. The tour was a determinedly non-commercial affair, as in 1990 he’d vowed stop playing fan favourites such as ‘Rebel Rebel’ at live shows. (He did indeed perform that song and other hits during his 2002 ‘Heathen’ tour, but in 1995 the vow was still fresh.)

This rehearsal audio clip sounds like vintage Bowie. Renditions of ‘DJ’ (from ‘Lodger’) and ‘Breaking Glass’ (from ‘Low’) sound muscular and funky, while his instructions to other musicians are delivered with elegance and poise: “Peter, as we presume that the whole band is watching you for the end of that thing, can you make your movements much smaller?”

Yet the Massachusetts leg of the tour perplexed one local reviewer, who wrote in The Providence Journal in September 1995: “Bowie played material from his brand new album and relative obscurities from his past… With a few exceptions, the show took a dark, almost joyless approach in the tone and subject matter.

Well, Bowie had never intended to make things easy for his audience on this tour, telling a USA Today interviewer it was deliberate “commercial suicide”. David Bowie – unpopular? More than 20 years since this was recorded, it’s evident that’s simply impossible.