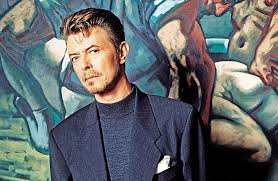 Senior specialist in modern & post-war British Art at Sotheby’s, Simon Hucker, told 5 live Drive that David Bowie was interested in artists that were ‘out-of-fashion’ or ‘forgotten’ which is why he was attracted to ‘British art’ over ‘American paintings’. Bowie’s collection also included pieces from some of Britain’s biggest modern artists including Henry Moore and Damien Hirst – and the singer’s own 1960s Italian designed record player.