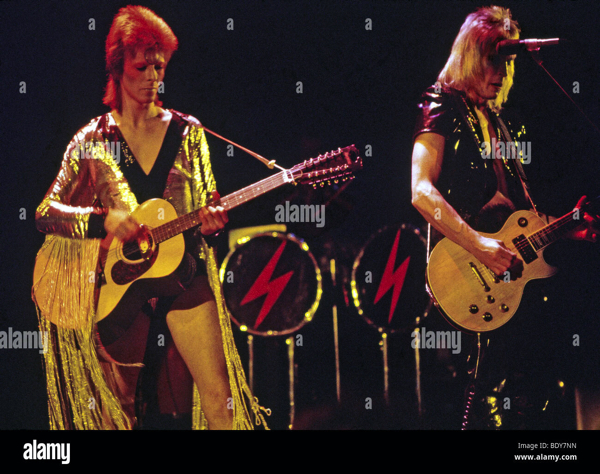 David Bowie, like so many so-called geniuses, would have been nothing without his collaborators. A bold statement, perhaps, but only if you regard the glam icon as the emblem of self-realising creativity he is so often assumed to have been. Sure, his clarity of expression should not be understated, but neither should that of people like Mick Ronson, the guitarist who provided the string arrangements for many of Bowie’s biggest hits during his Ziggy Stardust era.

The fruitful collaboration between Ronson and Bowie gave birth to The Man Who Sold The World, Hunky Dory, Ziggy Stardust, and Alladin Sane Given Ronson’s unparalleled contribution to Bowie’s success, it’s little wonder the musician chose to write songs with the guitarist in mind. That’s not to say that Ronson didn’t owe a lot to Bowie as well. The latter’s performance of ‘Starman’ on Top Of The Pops cemented Ziggy as a pop mainstay but also threw Ronson under the spotlight, marking a rise to fame that would coincide with his ’72 ’73 tours with David.

At this time, the guitarist was forced to undertake ten-minute guitar solos to cover Bowie’s absence during costume changes. Ronson’s star was well and truly on the rise, and by 1974 he was getting as much fan mail as Bowie was. At the same time, rumours began to spread that Ronson had taken the lead on almost all of Bowie’s hit records, which may well have motivated Bowie to record the bulk of Diamond Dogs in isolation over the course of three days.

The tracks Bowie wrote for Ronson are ‘Growing Up and I’m Fine’, ‘Music Is Lethal’ and ‘Hey Ma, Get Papa’. The former appeared on Ronson’s debut solo album Slaughter on 10th Avenue when the relationship between the pair still hadn’t deteriorated. Bowie recorded a demo for the guitarist on the piano, which Ronson recreates so faithfully that there’s some debate as to whether Bowie ended up singing that version too. ‘Music Is Lethal’, meanwhile, sees Bowie in the act of translation. The 1974 Ronson cut is based on Italian singer Lucio Battisti’s 1972 track ‘Io vorrei… non vorrei… ma se vuoi’ and features Ronson walking through dingey streets populated by “cocaine bookers, troubled husbands.”

Finally: ‘Hey Ma, Get Papa’, which was also written for Slaughter on 10th Avenue. The track was inspired by Ronson’s burgeoning fascination with effects pedals and synthesisers. After emerging from the sweep of an arpeggiated synth, the track becomes increasingly overpopulated, with background voices offering up their mimicry as Ronson feeds his voice through a raft of strange effects. While the track ends up sounding a little bit like a confused version of Queen’s ‘Bohemian Rhapsody’, this ornate and plush offering is certainly one of Ronson’s most ambitious moments on Slaughter on 10th