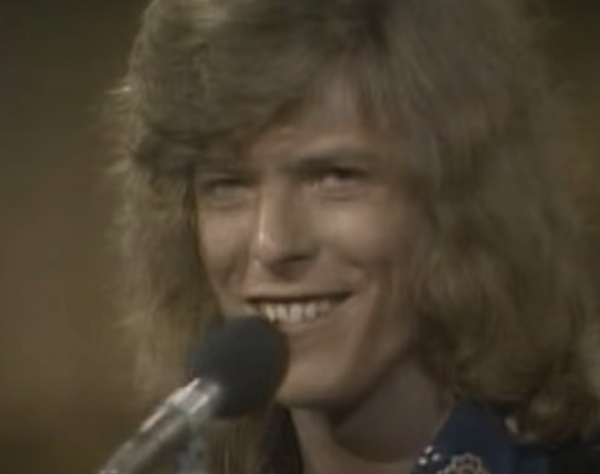 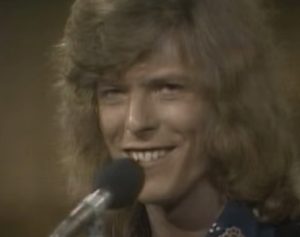 On 10th May 1970, David Bowie won an Ivor Novello Award for his song Space Oddity.

Collecting the award at The Talk Of The Town in London, he performed the song for a live TV audience that was transmitted live via satellite across the world, to countries like America, Australia, France, Holland, Spain and Venezuela.

It was a big deal for a breaking artist, so you can imagine Bowie’s feelings when backing band The Les Reed Orchestra made, well, a total arse of it.

The original Space Oddity was a recorded with a crack outfit of upcoming musicians in 1969. Rick Wakeman played the Mellotron, top session man Herbie Flowers was on bass, Tony Visconti was on flute and woodwind, guitarist Mick Wayne had been in a band with Jimmy Page and his band Junior’s Eyes were a promising (now cult) psych rock band. Gus Dudgeon – soon to be famous for his work with Elton John – produced it and Paul Buckmaster, an arranger and conductor who would go on to work for the Rolling Stones, Leonard Cohen, Miles Davis, Guns N’ Roses and many more besides, did the string arrangement.

For the Ivor Novellos, however, the house band was the Les Reed Orchestra.

Reed was a songwriter and arranger of note. He co-wrote the Tom Jones hits It’s NotUnusual and Delilah. But his work with Engelbert Humperdinck, Des O’Connor, PJ Proby, Pickettywitch, and Les Reed Orchestra hits like Man of Action, firmly established him as one of the old guard, a light entertainer from a bygone age.

By 1970, Bowie was more Lou Reed than Les Reed. And it’s written all over his face.
From the moment Bowie walks on stage in pink bell bottoms past the suited musicians of the Orchestra, it feels like something is awry. The tempo is faster than the record. At 49 seconds, when the ‘take-off occurs’ – the moment Major Tom’s rocket leaves earth and the record begins to soar, The Les Reed Orchestra let out what can best be described as a sad fart sound.
Bowie’s face says it all: it’s going to be one of those nights. Still, there’s only several million people watching on several continents.
And then, at 2.06, the guitar solo kicks in. Well, stumbles in. It’s played with all the finesse and passion of an ageing hack who’d fallen out of The Nag’s Head, heard the record from the radio of a passing Vauxhall Viva, and thought it was a load of hippy claptrap.
Barely in time, slightly out of tune, with only a passing resemblance to the record he’d just won an award for, Bowie rolls his eyes, shakes his head, bites his lip and finally just laughs it off.
Planet earth is blue and there’s nothing he can do. The old guard have got to go.
Even the official David Bowie Facebook had to laugh when they shared it: “We’re not suggesting for one second that it was the music contribution of the Les Reed Orchestra that may have tickled Bowie…” they wrote in 2015, when Bowie was still alive.