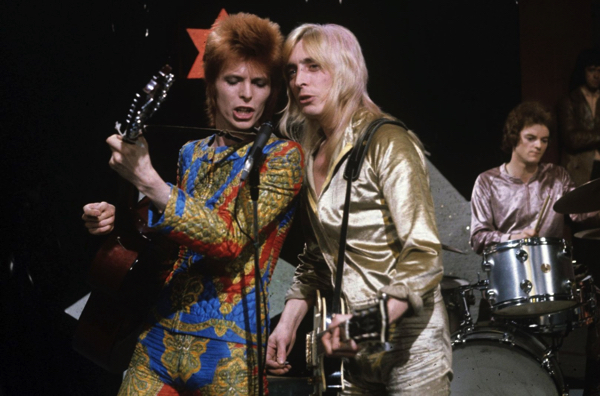 A PLANNED statue of singer David Bowie as his Ziggy Stardust character will sing “on the hour every hour”, according to a new report.

For a crowdfunding appeal has been launched in a bid to raise £100,000 for the statue in Aylesbury, Buckinghamshire – the town where Ziggy was first performed.

Under the novel tribute project, speakers above the coloured bronze will play one of 2,000 tracks every hour.

Bowie, who died of cancer in New York in January at the age of 69 played an experimental gig at the Friars music venue in Aylesbury in 1971 to see if he could cut it playing live.

He unveiled two albums and his Stardust persona during gigs at the Friars club in the early 1970s.

Leading campaigner for the effigy, David Stopps, said it was going to be a “stunning work of art” with audio that “brings it to life”.

The artwork, designed by sculptor Andrew Sinclair, will have Ziggy Stardust as the main figure, but behind that will be sculpted references to some of the other characters Bowie created including Aladdin Sane and Lazarus.

Bowie first performed tracks from his album The Rise and Fall of Ziggy Stardust and the Spiders From Mars in Aylesbury.

It is due to stand under the arches in the Market Square which Bowie referenced in Five Years, the opening track of The Rise and Fall of Ziggy Stardust & The Spiders from Mars album.

The campaign to build a statue has the support of all the local authorities but none of the funds will come from council tax payers.

1 thought on “Singing £100,000 statue of David Bowie planned where he launched Ziggy Stardust”