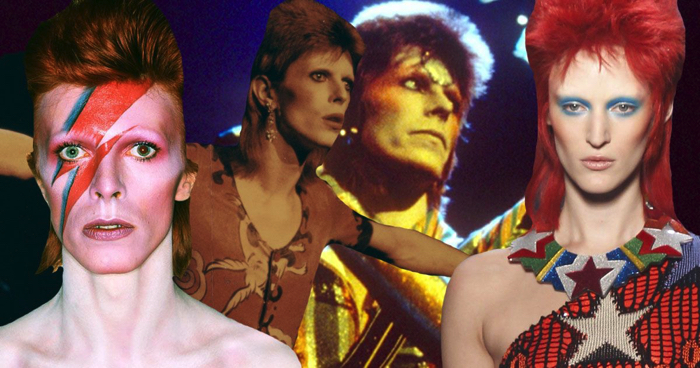 “Rock the Look”, where celebrity makeup artists recreate their clients most iconic, current and covetable looks on a Billboard editor.

“Rock the Look”, where celebrity makeup artists recreate their clients most iconic, current and covetable looks on a Billboard editor.

To get the look, Michelle first outlined the lightning bolt with MAC Studio Chromeographic Pencil (or a nude colored pencil works fine too). She did this by carefully following along to the picture, but if you’re not as skilled with drawing, you can print the image, cut out the lightning bolt and trace the shape against your face. For this, placement and proportion are key, so take your time–Michelle had to try a few different times to get it right!

Once the shape is how you like it, use scotch tape to block off the shape of the bolt. She then mixed MAC Cosmetics’ Paint Stick in Genuine Orange and Basic Red, painting it on in even strokes with a flat foundation brush. If you do not have paint stick or a foundation brush, mixing cheap, bright colored lipsticks on a smooth surface and using a flat paint brush from the art store works just as well. To get that paint brush look above the eye, Michelle used the same flat brush and quickly flicked upwards. After she was done with the bolt, she carefully lifted the tape up, exposing flat, symmetrical edges.

David Bowie’s Final Recordings Revealed: Hear ‘No Plan’ & ‘When I Met You’

Using the same colors, Michelle then took a fluffy eyeshadow brush and blended on the lid outwards, like you would a dramatic cat eye. She then used that same brush and color on the lips, buffing inwards.

For the blue and black accents, Michelle first loaded a tiny flat art store brush with MAC’s Paint Stick in Cyan Blue, laying the brush flat and outlining upwards. The key to straight lines is picking a brush the exact width of the line you want, so choose wisely! She then took a tinier brush and painted the black lines with a black liner in between the blue and red.

To brighten up the look and make it more Bowie, Michelle took a magenta pink eyeshadow (or blush if you don’t have) with a fluffy brush and buffed it on top of the red Paint Stick on the eyes and lips, then used a blush brush to add pink cheekbone accents applied like you would contour. On top of the blush, she added dabs of MAC’s Strobe Cream to the high planes of the face, and finished off with a high gloss brushed in even strokes on top of the bolt.