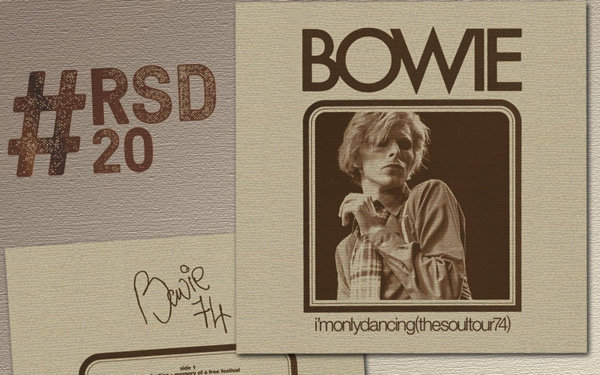 The posthumous David Bowie bounty will continue on April 18 with the the releaese of a special Record Store Day rarity live album. I’m Only Dancing (The Soul Tour 74) pulls together previously unreleased tapes from shows in Nashville and Detroit in 1974. The new album joins another upcoming Record Store Day release, ChangesNowBowie, and, according to Parlophone Records, the live album will come in a 2LP and 2CD format.

“Taken from recently discovered sources in The David Bowie Archive®, ‘I’M ONLY DANCING (THE SOUL TOUR 74)’ was recorded mostly during David’s performance at the Michigan Palace, Detroit on 20th October, 1974, with the encores taken from the Municipal Auditorium, Nashville on 30th November, 1974,” according to a statement from Parlophone. “The only song missing from the full set on the 20th October performance is ‘Diamond Dogs’ which was unfortunately only recorded in part. To make up for that it was decided to include the encores from the 30th November performance which featured ‘Diamond Dogs’ but also enables a fuller representation of the set from The Soul Tour including such numbers as ‘Knock On Wood’ and the ‘Foot Stomping / I Wish I Could Shimmy Like My Sister Kate’ medley.”

The 1974 Soul Tour was a “radical departure” from the first part of that year’s Diamond Dogs “theatrical extravaganza,” according to the release. “During a three week break in late 1974, the Diamond Dogs Tour’s elaborate six-ton Hunger City stage set was drastically stripped back, and the tour’s set list overhauled to include as-yet-unreleased tracks from the Young Americans sessions at Sigma Sound in Philadelphia. The Soul Tour also featured a revamped band, augmented to include musicians and vocalists from those sessions, and rechristened The Mike Garson Band.”

The artwork for the album is based on the original design for the programs that were handed out at the venues on The Soul Tour, which hit less than 20 cities in the East and South of the U.S. This is the first time the audio from that part of the tour has ever been officially released. In January, Parlophone announced the Record Store Day special, the nine-track ChangesNowBowie, culled from a 1996 session with longtime bassist Gail Ann Dorsey, guitarist Reeves Gabrels and producer Mark Plati during rehearsals for a 50th birthday gig at Madison Square Garden.

1. “Introduction – Memory Of A Free Festival”

3. “Somebody Up There Likes Me”

Recorded at the Michigan Palace, Detroit on 20th October, 1974 and * at the Municipal Auditorium, Nashville on 30th November, 1974.