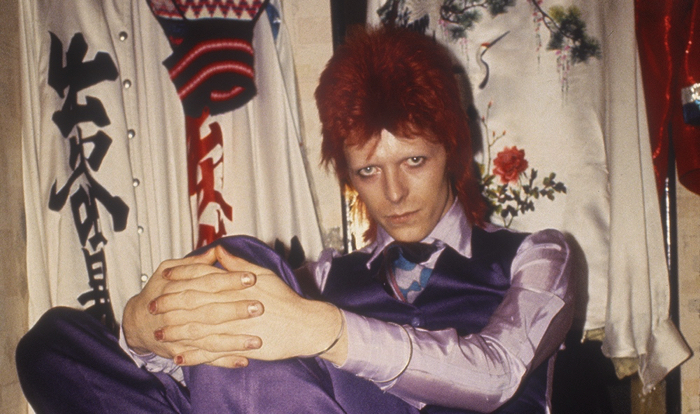 Mick Rock has been photographing the world’s biggest rock stars for more than 40 years. He spoke to Steve Fairclough about his career and new David Bowie book

Mick Rock has nigh on the ultimate rock-star name (which is his real name, by the way), looks like a rock star and has a coterie of rock-star friends that has included David Bowie, Lou Reed, Syd Barrett and Iggy Pop. When I met him recently at the Taschen bookstore in central London, a queue was snaking around the corner of the shop waiting for Mick to sign copies of his latest tome, The Rise of David Bowie 1972-1973, so it was clear, Bowie association aside, that this was one photographer who had his own fan base.

Inside the store I asked Mick what made him first pick up a camera. He laughs and replies: ‘LSD. I was studying modern languages and literature at Cambridge and took an acid trip one day with a friend and a couple of other people. I picked up a camera – his camera, because I couldn’t afford one – and that just started everything. Then, after a bit, this friend of mine said: “Oh, this local band needs some pictures and they’ve got a fiver to pay you,” and I thought, “I’ll take it”. Then it just kind of kept rolling.’

Mick adds: ‘I wasn’t looking to take pictures, which seemed very easy to me, but I liked the kind of visceral, non-cerebral thing when it came to taking photographs and it never stopped. I already knew Syd Barrett [of Pink Floyd], who was not at Cambridge University but he was from Cambridge, and I’d shot a couple of other bands. I remember I’d shot a version of The Pretty Things and a band called Eire Apparent, and some other bits and pieces because I was popping down to London. Then, of course, I shot Syd. I suppose those were the first pictures of mine that people know – The Madcap Laughs album ones and the outside ones. I was also doing a couple of album covers for Rory Gallagher.’

Mick combined his photography with conducting interviews, ‘…which would save a publication some money because they could combine the two fees and it made me some extra money,’ he explains. ‘That was how I met David Bowie – I went to interview him for a magazine so I got to know him a bit. It was more than just taking photographs – we talked about certain common interests, not the least of which was Syd Barrett. Then, of course, lurking over the ocean were Lou Reed and Iggy Pop, who were not particularly known at that point because they hadn’t been able to get dogs to p**s on their records. Lou had done a solo album with RCA, which had done nothing, and David’s star had [risen]…’

He adds: ‘When I first met David there were 400 people at the show in Birmingham Town Hall, so he had a little bit of a cult following. It was really the album Hunky Dory that turned me on to David, especially the Life On Mars? track, which, many years later, I did the videos for, alongside a bunch of other stuff. He gave me the copyright to the visuals.’

Of his relationship with Bowie, Mick explains: ‘We just hit a certain dynamic. I wasn’t really bothered about money. Bowie would invite me to things and I’d go to a couple of clubs – my wife and his wife – and it just kept rolling along right in front of my camera. It did so for 21 months and obviously the book bears some of the fruit of this period, but by no means all of it. I’ve got more than 5,000 photographs just of the Ziggy Stardust period alone.’

Mick continues: ‘Then, through David, I met Lou Reed and Iggy Pop when they came to London to make records Bowie was producing and it just kept going. Then came Queen, Rocky Horror, Roxy Music… I mean, I suppose they were certain kinds of bands and there was a new vibe to it all. I think we all thought that the Beatles and the Stones were a bit passé.’

Mick is keen to point out that his career was far from over when the 1970s stopped. ‘People say: “Oh, you’re the man who shot the ’70s,” as if at midnight in December 1979 I dropped my cameras and went home to mummy.’

‘I had done some album covers as well and a bit of art directing,’ Mick continues. ‘There wasn’t a lot of money in it because the record companies just wanted cheap pictures. The good thing was no one used the phrase “copyright” or “intellectual property”. I started hearing that much more in the late ’80s when people started saying, “Oh, you know, your intellectual properties,” and I said, “What are you talking about? They’re photographs; they’re pictures”. But, of course, they turned out to be what they are. Maybe I’d sell a picture like “Bowie in the mirror” for £25 back then, but now you’ve just got to sell one print, even a smaller size, for a lot more money than that.’

Mick adds: ‘I kept shooting and it all just kept rolling along until 1996, when I had quadruple bypass heart surgery. Well, I had developed a serious 20-year cocaine habit in New York and was chain smoking, which was what really did it. My doctor said it was really the cigarettes that did me in, but of course without the cocaine I wouldn’t have smoked that many cigarettes.’

Mick came out of hospital in early 1997 and explains: ‘One thing with not doing cocaine all day is you have a lot of time on your hands, but also, at the same time, there was interest in my early work and suddenly there was “classic rock photography” and whatever. ‘Then I started to shoot some of the newer acts and then the books came along and the first exhibitions, and everything just got going again.’

Amid the chaos of his own drug- fuelled lifestyle, Mick managed to keep all his negatives and slides. Is he glad he did so? ‘Well, yes, because it would have been easy to have slung it in the corner and have forgotten about it. The value of the archive was building throughout the late ’90s into the new millennium, and then over the last decade I didn’t know what I could sell. But just my Bowie collection from that period – forget the others – well, I know we’re talking into the millions. Then I’ve got all these other pictures, but I’m not quite ready to lay down my camera and have people p*** on my pictures, so I keep it controlled.’

As for preparing the Bowie book, did going through the archive prove to be a pleasurable experience? ‘ I don’t know,’ says Mick. ‘Once I commit to something I tend to do it, and once I’m doing things I intend to enjoy them. It wasn’t that I was desperate to explore the past, but I was curious about all these previously unseen pictures as well. So it’s what I do. I like to shoot – that’s my favourite thing still, because obviously I spend a lot of time buggering about with the past. I have lots of mates who have done books as well and people just love the old work.’

Taschen’s ‘Sumo’ version of the Bowie book was published in autumn 2015, so did Bowie know about this book? Mick shoots back: ‘Well, he co-signed it, so of course he knew about it. I wouldn’t do it without him being involved.’ But did Mick know the extent of Bowie’s health problems? ‘No,’ he replies. ‘I thought it was still related to his strokes. I didn’t know – he was very strong about the cancer factor. But we did a lot of emailing and we saw each other once during the process. He saw everything; nothing went out without him first seeing it.’

Alongside his stills, Mick also directed seminal music videos for Bowie, including Life on Mars, The Jean Genie, Space Oddity and John, I’m Only Dancing. He reveals: ‘I did a few others over the years too, but we’d just talk about it – like, “If we get time tomorrow…” They were done for nothing and there weren’t many out there, but David knew I was interested and had a couple of little experimental things. David loved it, but he mostly let me get on with it because he didn’t have time, and he’d say: “Let’s do this, Mick,” and I’d go, “Yeah, we’ll do it!” I’d show him the completed thing and he’d say, “Fantastic, Mick”, because he didn’t have time as his whole thing was in motion.’

Mick adds: ‘I don’t recall Bowie being very critical of anything – he just encouraged me. He was a great encourager, David – he was not someone who’d say, “Oh, I don’t like that”. There was none of that bulls**t going on. He wanted things to keep happening – he was a unique personality. He was like Picasso – he was always producing new stuff and different stuff; that was what was interesting about David. So here I am… and I’m not sorry!’

So has Mick now embraced the digital age? ‘Mostly I shoot digital – why not? I like the instantaneity of it,’ he says. ‘Mostly I shoot with aCanonEOS5DMarkIII–Ilike the speed of it as I don’t want to miss anything.’