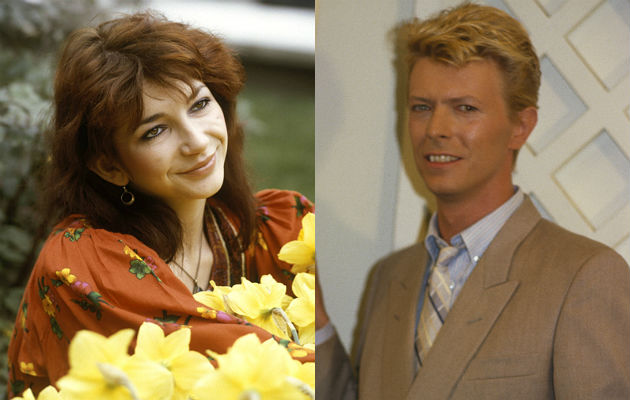 Kate Bush has paid tribute to the “bravery and power” of late singer David Bowie.

The Wuthering Heights star was an acquaintance of Bowie’s and, along with millions of fans worldwide, was left devastated when he died aged 69 in January (16) after a short battle with cancer.

Remembering her pal as the year anniversary of his death fast approaches, Kate said in an interview with The Fader that her admiration for Bowie is eternal.

“I was asked whether I would write something, and because he meant such a lot to me, I really felt moved to do so,” Kate said. “He was one of my great heroes when I was growing up. He was such a brave artist, so unusual, and I loved his music. I met him a few times; he was really charming and playful. But I just sort of admired what he achieved creatively.”

Prior to his tragic passing, Bowie completed his album Blackstar, which was released two days before his death. The record was widely praised by critics, and Kate thinks it is the singer’s best offering of his career.

“One of the most powerful things that I heard recently was Blackstar by Bowie,” Kate added. “I thought it was beautiful. Very moving of course, but I think one of the best things he’s ever done.”

As well as a passion for music, another thing the 58-year-old and Bowie had in common was their history of challenging gender identities with their work.

And Kate added to the magazine that when she puts pen to paper for a new song, her identity as a woman goes out the window.

“I think when I’m working creatively, I don’t really think of myself of writing as a woman. I just think of writing as me, as a person, if that makes sense,” she said.