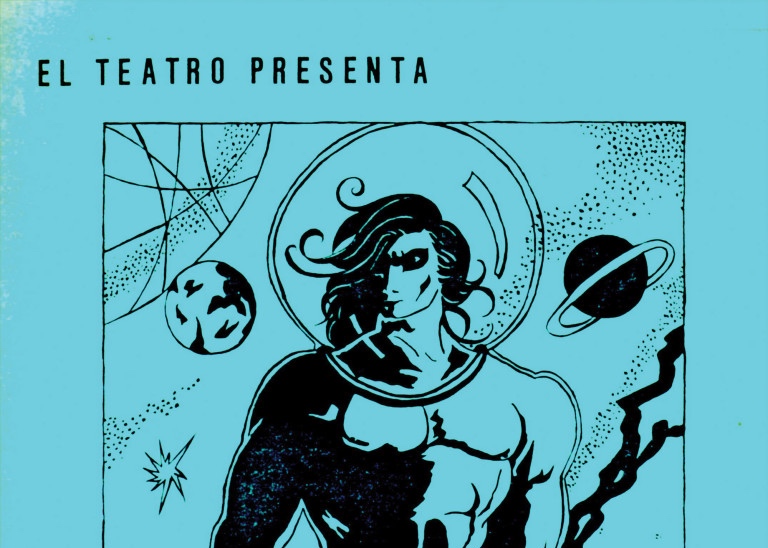 The sudden and unexpected death of David Bowie this year touched me personally. He had been more than an influence, more than an inspiration for this former high school English teacher and present-day playwright. A flood of memories took me back to a time when I taught in Crystal City, and my theater students had created and produced a Chicano sci-fi space opera based on Bowie’s music.

While my duties as an English IV teacher extended to instructing and sponsoring the school newspaper and a video production class, it was the theater program that gave me the most satisfaction, for it allowed me to explore my own creativity and, just as important, share my enthusiasm for music and theater with my students. I’d often play new music for our rehearsal warm-ups.

When I played David Bowie’s LP Station to Station in early 1976, it was my theater students’ first encounter with him, and it led to a discussion of his earlier The Rise and Fall of Ziggy Stardust and the Spiders from Mars LP. Who was this strange, shape-shifting chameleon? they asked. Why did the songs vary from rock to folk to funk? And would the future be like George Orwell’s 1984? These were young Chicanos growing up in a rural community. They were opining and questioning with a newfound agency after a successful student walkout from 1969 to 1970 led to a more equitable school system for Mexican Americans. The students had boycotted school, demanding a slew of reforms — more Mexican-American teachers and counselors, a Mexican-American studies courses, bilingual education — and their success was aggrandizing personally as well as on social and political levels.

Post-boycott, the students were more confident about expressing their views on mainstream culture and music. Over time, as they listened to and processed Bowie’s earlier music, especially Space Oddity, we brainstormed ideas for a sci-fi rock opera, in some cases drawing from real life experiences.

When a cast member and his family were returning from a shopping trip in Piedras Negras, Mexico, some 35 miles from Crystal, a Border Patrol agent pulled them over for inspection. My student asked the officer why they were stopped. “We’re looking for aliens,” he replied. To which our young actor retorted, “Oh, I didn’t know they’d landed.” After that, we decided that our play might also explore how the Border Patrol perceived them — as aliens in their own land. A history teacher pointed out that during World War II, Crystal City had been the site of an “alien detention camp,” then located across the street from our high school. Students added that they had relatives who had married into Japanese families.

Early on, one student asked how we could play English characters when we were Mexican Americans — Chicanos. Brother Alexis Gonzales, a visiting theater professor from the Jesuit Loyola University in New Orleans, came to the rescue. He said they had every right — even an obligation — to play any part because they would bring something unique from their culture to the work and make it their own. “It’s called acting and empowerment,” Gonzales said, “and blind casting.” (Four decades later, the hit musical Hamilton has Latino and black actors playing the lead roles of the white Founding Fathers.)

We decided that our play might also explore how the Border Patrol perceived them — as aliens in their own land.
It became obvious we were embarking on a marvelous theater venture into future, past and present. We called our work Stranger in a Strange Land, from Robert Heinlein’s sci-fi novel and from the Commission on Civil Rights 1970 report on Mexican Americans: Titled “Strangers in One’s Land,” the report spoke to the invisibility and alienation of Mexican Americans and the denial of their civil rights. Bowie’s persona as the alien outsider fit perfectly. We also incorporated the alien detention camp in the final scenes of the play framed by a regimented, Orwellian Animal Farm society.
At that time, the Nicolas Roeg film, The Man Who Fell to Earth, with Bowie performing in his first starring role, wasn’t in wide release, but our city library had a copy of the novel it was based on. I wrote a story line, set to 21 Bowie songs and with a cast including Major Tom, Ziggy, Starman, Lady Stardust, Jean Genie and the strange Warren Peace.

In our collaborative script, Major Tom is stranded on Mars. A captive Starman from a dying planet communicates, through NASA’s ground control, a message for Earth. Ultimately, these two characters and a young folk singer, Lady Stardust, set into motion a story filled with CIA and FBI spies as well as unscrupulous politicians, prophets and profiteers. At the end, the imprisoned Starman is released and returns to his planet, streaking the skies with rainbows in gratitude.

For our dystopian tale set to a glam-rock beat, we employed Bowie’s use of mime for makeup choices, aping the cover of his Pin Ups LP, on which Bowie and supermodel Twiggy appear in mime face. It added a touch of meta-theater to do the piece in whiteface.

We double-cast a few roles, since some of our student actors came from seasonal migrant farmworker families and it wasn’t unusual for a contractor to tell families to immediately report for early harvests. Overnight, these families — and potentially our student actors — would have to board up their homes and make the long trek north.

Our student print shop published our playbill of 20 pages with the lyrics of each song and a book (libretto) of the play’s action. An elementary teacher said it was like attending an opera in New York City.

The production brought us media attention. The Laredo Times ran a short notice. Friends from San Antonio drove to see the show. When the cast met the audience of receptive city folks, one bright future actor suggested we send our libretto/playbill to “Mr. Bowie.” It wasn’t just bluster. They were justifiably proud of their accomplishment. It was more than greasepaint and cool sci-fi stuff; it was a window into a world of theater they had never imagined.

That summer I forwarded our libretto to Bowie, c/o RCA, his record label. By then, we were working on next year’s production — the first-ever staging of Evita in the United States, which earned coverage by then-San Antonio Express -News arts critic Ben King.

I left Crystal City in late 1978. Texas Monthly’s editor Bill Broyles had asked me to write an investigative piece on Texas drug lord Fred Gomez Carrasco, after seeing our student theater piece on Carrasco at the Floricanto Festival in Austin. A student who had been in Stranger told me of a new Bowie single, an instrumental titled “Crystal Japan.” He was flummoxed. He asked about our letter and wondered whether Bowie might be giving us a nod or a wink in reply. Alas, we never learned if that was the case. However, I re-sent the libretto from Stranger with a note about our production being an homage to his work. Bowie, who was on Broadway in the stage play The Elephant Man, quickly responded with a note and several 8-by-10 photos signed “Many Thanks, Bowie.”

The year before his death, Bowie wrote and produced Lazarus, a sequel to The Man Who Fell to Earth. The play used mime, dance and multimedia as well as 18 songs. New York critics described the plot in terms that sounded eerily familiar to our own effort: The alien Newton returns to find a way to save his dying planet; he encounters intrigue and subterfuge in the process; like our Starman, he returns to his dying planet in the end, but unlike our space alien, he fails in his mission. It isn’t out of the realm of possibility that we may have influenced the unbelievably talented genius just as he greatly inspired us in a small Texas town 40 years ago.