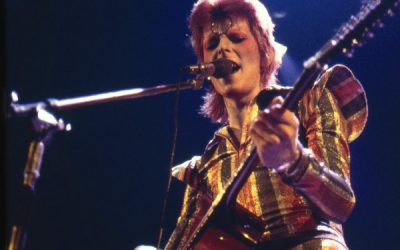 When thinking about the legendary chameleon of rock and roll David Bowie it’s hard to think too far past the fire-haired alien rock and roll star, and one of Bowie’s most famous personas, Ziggy Stardust. In this rare 1972 radio interview, Bowie introduces the concept that would cement his status as a rock icon.

The interview takes place with an unfortunately unknown interviewer on an American radio station back in 1972. During the interview, the pair discusses some of the songs on Bowie’s seminal album Hunky Dory and then the conversation turns to Bowie’s next big record: Ziggy Stardust and The Spider from Mars. They even go on to talk about the recording sessions for that LP including a word on the songs which were left on the cutting room floor – some of which would be picked up later.

Interviewer: “Could you explain a little more in-depth about the album that’s coming out—Ziggy?”

Bowie: “I’ll try very hard. It’s a little difficult, but it originally started as a concept album, but it kind of got broken up, because I found other songs I wanted to put in the album which wouldn’t have fitted into the story of Ziggy, so at the moment it’s a little fractured and a little fragmented….

“So anyway, what you have there on that album when it does finally come out, is a story which doesn’t really take place, it’s just a few little scenes from the life of a band called Ziggy Stardust and the Spiders From Mars, who could feasibly be the last band on Earth—it could be within the last five years of Earth. I’m not at all sure. Because I wrote it in such a way that I just dropped the numbers into the album in any order that they cropped up. It depends in which state you listen to it in.

“The times that I’ve listened to it, I’ve had a number of meanings out of the album, but I always do. Once I’ve written an album, my interpretations of the numbers in that album are totally different afterwards than the time when I wrote them and I find that I learn a lot from my own albums about me.”

At the time the new record from David Bowie, the now-iconic Ziggy Stardust and The Spider from Mars, was still under final construction but with the foundations firmly in place. It’s understandable then that Bowie seems a little taken aback by his interviewers knowledge of the album. However, the gentleman that he is, Bowie walks the interviewer through the concept of the album and Ziggy himself.

It’s interesting because Bowie would find a place for most of these tracks later in life. Songs such as ‘Amsterdam’, which was later released as the B-side to ‘Sorrow’ in ’73, ‘Holy, Holy’ which found a home on the flipside of ‘Diamond Dogs’ in 1974, and his Chuck Berry cover ‘Around and Around’ which ended up as the B-side of ‘Drive-In Saturday in 1973, were all shared with his adoring audience.

Another track discussed by the great man is Bowie’s ‘Bombers’ which he describes as “kind of a skit on Neil Young… it’s quite funny.” Although it was released in 1971 as a promo the track would find its way to the 1990 reissue of Hunky Dory. Similarly, ‘He’s A Goldmine’ arguably one of DB’s most famous B-sides thanks to a notable inclusion in Haynes’ 1998 movie Velvet Goldmine, also found a new home on the 1975 reissue of ‘Space Oddity’ which amuses Bowie “probably the lyrics are a little bit too provocative.”

Starboy: Images of a young David Bowie before he became an icon

The video below has the first part of the conversation in some questionable audio quality but you can find the complete transcript below that. This may be the first time Ziggy was ever introduced to the world, and it happened on a pokey US radio show.

David Bowie: “From the ‘Hunky Dory’ album I like, er, I like Bewlay Brothers very much. It’s personal. I’m sure it doesn’t mean a thing to anybody else. I suppose I inflicted myself on people with that track.”

Interviewer: “Was it a direct progression from the London Boys?”

Bowie: “Yes, it was.”
[The DJ then rudely presses David for details about recent studio work]
Bowie: “You know more about me than I care to know.”

Interviewer: Could you explain in a little more depth about the album that’s coming out?

Bowie: “I’ll try very hard, it really started it as a concept album and it kind of got broken up and because I found other songs I wanted to put on the album which wouldn’t have fitted into the story of Ziggy, so at the moment it’s a little bit fractured and fragmented. I’m just having a cigarette.

“What you have on that album when it does finally come out is a story which, doesn’t really take place.It’s just a few little scenes from the life of a band, called Ziggy Stardust and the Spiders from Mars, who could feasibly be the last band on Earth. It could be the last five years of the,I’m not at all sure, because I wrote it in such a way that I just lost the numbers into the album in the order that they cropped up and it depends which state you listen to it in.

“I’ve had a number of meanings but I always do, once I’ve written an album. My interpretations of the numbers in that album is totally different afterwards from when I wrote them. I learn a lot from my own albums about me”.

Interviewer: “What do you plan to do, I’d like to ask do you have some stuff recorded already? Did you not just do a version of Amsterdam the Jacques Brel song?”

Interviewer: “And a new version of Holy Holy?”

Bowie: “Where do you get your information from?”

Interviewer: “I have a friend who has a source of information. And another version of ‘Round and Round’ has that been dropped off Ziggy?

Bowie: “They are all the things that are in the can.”

Interviewer: “Are there any more?

Bowie: “Maybe and maybe not!”

Interviewer: “With ‘Round and Round’ was that on Ziggy Stardust or was it dropped?”

Bowie: “It was dropped, quiet honestly. Why was it dropped? It’s hard to say.”

Interviewer: “Uh, was it possibly inferior?”

Bowie: “‘Round and Round’ would have been the perfect kind of number Ziggy would have done on stage but,I think probably what happened is that a jam we jammed for ‘Round and Round’ just for old time’s sake, in the studio and the enthusiasm of the jam probably waned after we’d heard the track a few times.

“We replaced it with a thing called Starman.”

Interviewer: “That’s gonna be the single isn’t it?”

Bowie: “Yeah, they’re putting that out as a single. I don’t think it’s any great loss really ‘cos I’ve certainly, I certainly haven’t destroyed any of those tracks.I’ve kept them all. I think we could put them out as another album or something, at a later date,’cause they never really got used.

“You know, there’s a thing called Bombers which is a um, a kind of a skit on Neil Young.”

Interviewer: “Is it a single?”

Interviewer: “Is it a single or is it an album?”

Bowie: “Oh, it’s just one song we had. Now what else did we have? Do you want to know of things that we had in the can that we never used?”

Interviewer: “Is that a Neil Young thing too?”

Bowie: “No, that’s that’s David Bowie [Laughs]. It’s a lovely tune, erm, that probably won’t crop up? The lyrics are probably a bit provocative at the moment. They’ll probably hold that back for a bit.”

Interviewer: “Is it a big change from Hunky Dory?”

Bowie: “Changes are probably inevitable cos’ it’s the first track on the previous album.”

Bowie: [Laughs] “He’s asleep at the moment. I think he’ll be getting up tomorrow. Well, maybe Friday! [laughs]. He sleeps a lot because he’s very young!”

Interviewer: “I heard that you wrote the song Kooks from the Hunky Dory album for him? You said it embarrassed you now.

Bowie: “Er, yeah!
“Yeah, I’ll tell you why, he’s older now. I’d hate him to think that I felt like that then! [laughs]. I’ll write another one for him soon I think. Yeah, I’ll judge it for, like four years.

“I’ll write about him every four years. That gives me three years to keep writing. I’m not really embarrassed! [laughs]. I probably just said that.

“I don’t believe anything I say!”