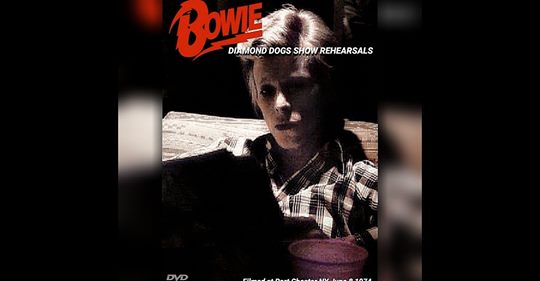 Filmed on June 8 1974 during the first day of stage rehearsals at the Capitol Theater in Port Chester, NY. It’s believed to have been filmed by cameraman John Dove using a single RCA video camera in the theater’s auditorium. Although dimly lit throughout, this footage gives a candid glimpse into very early rehearsals for the Diamond Dogs tour, and it was the first opportunity to test out Mark Ravitz’s stage set and to run through some of the complex dance sequences and special effects for the show. Choreographer Toni Basil can be heard giving instructions to David Bowie and dancers/backup vocalists Geoffrey MacCormack (Warren Peace) and Gui Andrisano, with many false starts and re-runs throughout. Also, the full stage lighting has not yet been finalised, and many adjustments are seen to be made under the supervision of lighting director Jules Fisher, who is also present.

The songs rehearsed are:

It must be noted that the music soundtrack during this rehearsal is not being performed ‘live’, but from a tape playing over the theater’s PA system, which had previously been pre-recorded one month earlier at the RCA Studios complex in New York City. Other than the backup vocalists, there are no other band musicians present on stage, and throughout the rehearsal Bowie and the backup vocalists can be seen pretending to hold microphones and miming to the pre-recorded backing track. Several bootleg CDs have been released over many years featuring just the audio from this rehearsal, and although digital video copies of this rehearsal have previously been shared and traded privately among collectors, this is the first time that this footage has been published publicly. The copyright proprietor has licensed this video presentation for private use only. Unless express and prior permission has been granted by the copyright proprietor, any unauthorized copying, editing, uploading, file sharing, diffusion and/or broadcast, in whole or in part, is strictly prohibited. Any such action establishes liability for a civil action.