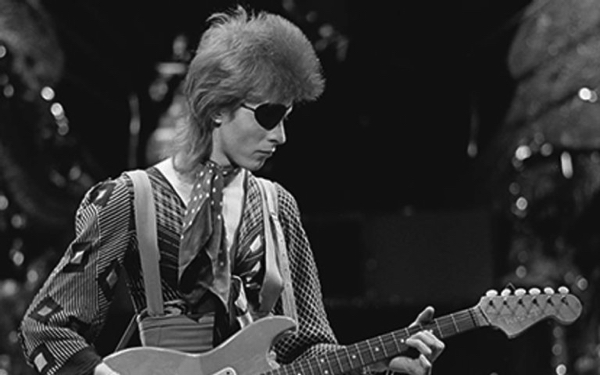 In the heyday of glam rock, there was only one name on everybody’s lips: Ziggy Stardust. The iconic incarnation of David Bowie, Stardust was the archetypal flame-haired rock and roller from outer space. In this clip from 1977 Bowie takes us through all the jigsaw pieces that created the puzzling wonder of Ziggy Stardust.

Many artists have found success being their natural selves on stage, and for the most part, that’s the best way to go. You’re just a lucky person if your organic progression through music is fuelled by the constant need for musical and theatrical reincarnation and the ability to pull it off – Bowie, in this regard, was the luckiest man alive.

The singer has become synonymous with the idea of reinvention and has rightly been nicknamed the chameleon of rock. It’s a name which is filed underneath a list of Bowie’s other names, each one a representation of a new persona, a new sound. and usually a new album. From The Thin White Duke to Aladdin Sane, from Major Tom to The Goblin King all pale in comparison to Ziggy Stardust.

The iconic figure of Ziggy became a mainstay of the seventies rock scene and during his time encourage a whole host of devout fans who saw Ziggy Stardust as the saviour of rock and roll. While it’s hard to imagine that Bowie’s character was a deliberate piece of acting at all times, his and Ziggy’s persona were so intertwined, in this footage from a CBC 1977 interview Bowie lays it out the Ziggy blueprint for all to see.

He says in the clip that Ziggy was a composite of all of the most interesting pieces of Bowie’s fascinations. He tells the interviewer that Ziggy was a combination of mime, Kabuki theatre, and the pulsating New York art-rock, “Velvet Underground, whatever”. One notable moment sees him accurately describe the music of Ziggy and the Spiders from Mars “a British view of American street energy.”

Bowie then moves on to the mythology of Ziggy. He attributes much of that to the album’s construction and the additional information the audience added to Bowie’s character. It’s a mark of Bowie’s solid presentation of such a fully formed foundation that audiences across the Western world were able to construct their own fantastical rock star on top of him.

It’s a fascinating watch and a reminder of the incredible intellect with which Bowie attacked his creations. He truly was like no other. Watch below as David Bowie explains the creation of Ziggy Stardust, 1977.