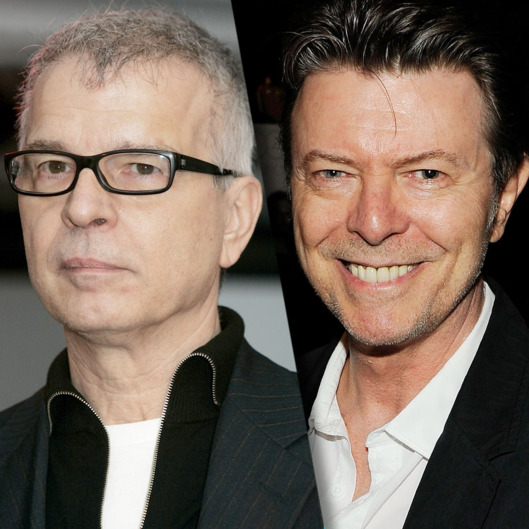 David Bowie hadn’t finished making new music in the weeks before he died.

Visconti was behind the boards for 14 Bowie albums including this year’s Blackstar which was released two days before The Thin White Duke died from cancer on Jan. 10.

“Three weeks before he passed away – he was fond of doing Facetime, your phone would ring and you’d open up your iPhone and there’s David looking at you which would be very jarring, very disarming – and he said, ‘How are ya, Tone?’ He goes, ‘I’ve written five songs for the next album,” relayed Visconti to celebrity interviewer Larry LeBlanc in front of a packed Sherton Centre Hotel ballroom on Saturday afternoon.

“So I’m telling you first hand, this is from the horse’s mouth, that he had five songs planned.”

Visconti, who was presented with the third annual Nile Rodgers Global Creator Award at Canadian Music Week, never heard the new material which he said Bowie had only made as demos at home.

He wasn’t sure if or when the songs would see the light of day.

“Everybody in the Bowie family and everyone involved is still in turmoil about this, not turmoil but grieving,” Visconti said in response to a question from Postmedia Network about the future of the songs.

“It’s hard to believe that he’s gone. It’s hard for me to speak of him in the past tense. And those close to him are going through the same thing.”

In fact, Visconti was in Toronto with his Bowie music tribute band Holy Holy when the news broke of Bowie’s death but he decided to press on with two sold out shows at the Opera House.

“We were shocked,” said Visconti. “I got the news at 2 a.m. when my text started going off and I woke up. I was the only one who knew he had cancer. It was even more of a shock to the other musicians, especially when we were doing this kind of show. I went back to sleep. And then I got (Holy Holy drummer) Woody (Woodmansey) coming into the bedroom at seven in the morning, saying ‘Are you alright?’ And I said, ‘No, I’m f–ked. I’m not alright. I’m really messed up.’ … we went the next night (to the Opera House), and (the audience) cried, we cried. It was fantastic.”

Visconti, who first met Bowie in 1967, said he was first attracted to the singer-songwriter’s voice.

“I like people with a great voice and a unique voice,” he said.

“I don’t like a sound-a-like. I look for that extraordinary gentle voice which I heard on that very diverse record that he made — his first album. My words were, ‘He’s all over the place but I think I can focus him in on one of those styles.’ He told me in later years that if he wasn’t a rock star, he would have gone into music theatre.”

When Bowie and Visconti first worked together on Bowie’s 1969 self-titled second album, they decided on a “12 string folk-rock style,’ and he wrote Space Oddity a week before they were going into the studio.

Visconti was not impressed and let co-producer Gus Dudgeon handle that one song.

“He said, ‘Can we do this one?’” Visconti recalled. “And I listened to it twice and I said, ‘You know, you sound a little bit like the Beatles. And ‘I’m sitting in a tin can,’ is a straight rip off from Paul Simon, from the Bookends album.’ And I said, ‘Also, there’s a guy floating in space and you’re capitalizing on that and this is a cheap shot. This is a novelty record. And you’ll get played on the radio every time they show a guy in space, they’re going to play your song. How are you going to follow up on that — a trip to Mars?’ I thought I lost the job.”