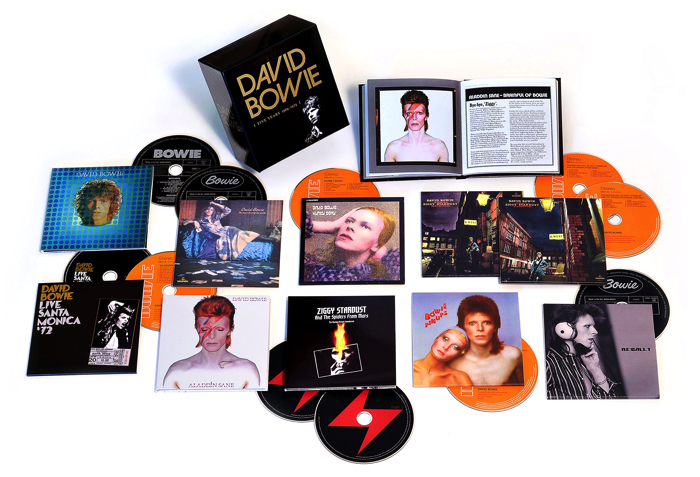 The first in a series of David Bowie Box Sets to be released on September 25th.

David Bowie has announced the first in a series of box sets to showcase his lengthy, diverse career. Five Years 1969-1973 will come out on September 25th via Parlophone and will be available on CD, vinyl and digitally.

Five Years will be a comprehensive look at the singer’s early years and transition from folk artist to glam-rock legend. The set will include remastered versions of six studio albums: 1969’s David Bowie AKA Space Oddity, 1970’s The Man Who Sold the World, 1971’s Hunky Dory, 1972’s The Rise and Fall of Ziggy Stardust and the Spiders From Mars, 1973’s Aladdin Sane and the same year’s Pin Ups. Two live albums — 2008’s Live Santa Monica ’72 and 1983’s Ziggy Stardust: The Motion Picture Soundtrack — will also be included. Each of the albums, with the exceptions of Ziggy and Aladdin Sane, have been newly remastered for 2015.

The set is topped off with a 2003 mix of The Rise and Fall of Ziggy Stardust done by the album’s original producer, Ken Scott, as well as an exclusive two-disc compilation of non-album singles and B sides titled Re:Call 1. Highlights of Re:Call include the unreleased single edit for “All the Madmen” and the original version of “Holy Holy,” the latter of which has been unavailable since 1971.

A book filled with technical notes by producers Scott and Tony Visconti, press reviews and a foreword by the Kinks’ Ray Davies will also be available with the CD and vinyl sets of Five Years.

The box set follows the 2014 release of Bowie’s first-ever career-spanning compilation, titled Nothing Has Changed. Hits and previously unreleased tracks from across his career were included on the album, which was sequenced in reverse chronological order.