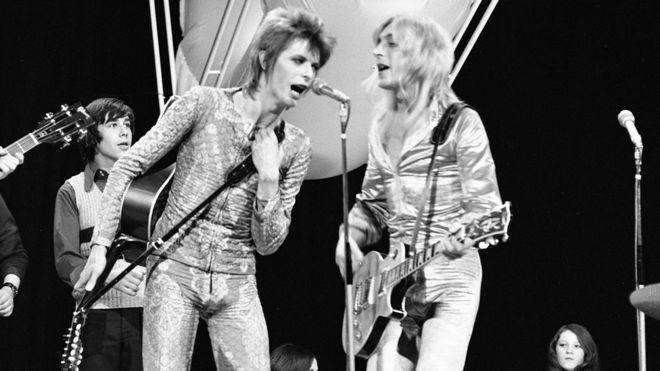 David Bowie’s performance of Starman on Top of the Pops in 1972 is considered a watershed moment in musical history.

Dressed in a snakeskin jumpsuit, he draped his arm around guitarist Mick Ronson, shocking viewers and ushering in an era of glamour and androgyny.

Long thought to have been erased, the performance has just been unearthed and could feature in a new BBC documentary.

It was captured by a fan on a home video recorder – but the tape has degraded and must be slowly “baked” in an incubator in the hopes of restoring the footage.

“For fans, it is something of a Holy Grail,” Francis Whately, producer and director of David Bowie: Finding Fame, told the Radio Times.

“It would fall apart if we played it, so it’s had to be very carefully restored. It will be a real coup if it comes off.”

The process of restoration is still underway, and will continue until very close to the transmission of the documentary – expected to be next month on BBC Two.

“The footage has only very recently been discovered,” said a BBC spokeswoman. “We’re hoping it will be ready in time to include in the film.”

Bowie’s “lost” performance was on the ITV teatime show Lift Off With Ayshea, a commercial rival to Top of the Pops, which ran from 1969 to 1974.

Almost all of the footage was accidentally wiped when Granada TV sent the tapes to be digitised.

According to host Ayshea Brough, duplicate recordings had been marked with an “x”, meaning they could be deleted, but the technician somehow misunderstood and binned the originals.

“He wiped years of my life and performances, and everybody else’s performances,” she told Record Collector magazine. “It’s a terrible thing.”

David Bowie: Finding Fame is the final in film-maker Francis Whatley’s trilogy of documentaries about the convention-defying pop star.

The 90-minute programme promises to feature unheard audio recordings and archival footage – including a 1965 BBC audition of Bowie and his band the Lower Third performing Chim-Chim-Cheree and Baby, That’s a Promise.

The BBC famously rejected the star for its talent selection group after this performance, describing him as “a cockney chap, but not outstanding enough” and “devoid of personality”.

The talent group was responsible for checking that any act putting itself forward for BBC radio play met its quality standards.