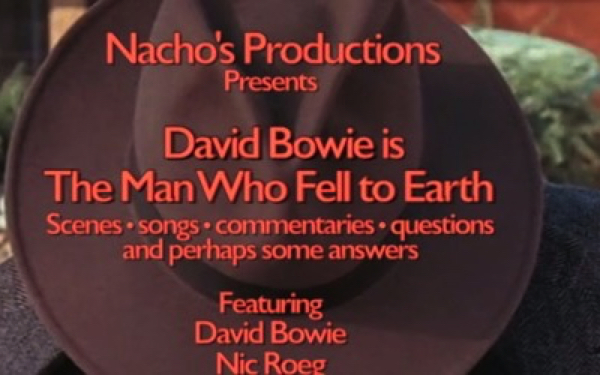 This is a film about a film – Nic Roeg’s 1976 esoteric science fiction movie – The Man Who Fell to Earth. Roeg’s film has beguiled and baffled audiences since it’s release. It explores, often in abstraction and allegory, the themes of alienation, power, love, trust and betrayal.

David Bowie is The Man Who Fell To Earth is an attempt to partly explain the movie. And it is a look at the way the film came together and at Roeg’s working methods, and at the creative process itself. And because it is a film about the creative process, it was felt that it should also in itself, try to also be creative.

It is quite widely known that Bowie and his music were greatly influenced by Roeg and the time he spent working on the film. And so David Bowie is The Man Who Fell To Earth also tries to paint a small portrait of Bowie and his music during the era – from latter part of ’74 up to the January 1977 album, Low. Bowie also created music that was intended for the soundtrack to The Man Who Fell to Earth. Famously, it was never used and remains almost unheard to this day. However, parts of the unused music were later incorporated into his albums Station To Station and Low. And so, as part of the story telling in David Bowie is The Man Who Fell To Earth, some of Bowie’s music from those albums is used with re-edits of scenes from the movie, worked in with the interviews and commentary.
Whether or not David Bowie is The Man Who Fell To Earth is actually successful in these endeavors, you may judge for yourself. At the very least it is an hour in the brilliant and highly enjoyable company and art of Nic Roeg, David Bowie and Candy Clark.
_______________________________
Was Newton an alien?
In the first TV interview where he talks about the movie, Bowie becomes visibly irritated when host Russel Harty describes Bowie’s Thomas Jerome Newton character as an alien, and he almost chastises Harty for his presumptuousness; “…it’s assumed he’s an alien from outer space, but it may not necessarily be true”.
Yet on the surface at least, Newton is an alien, who has come to earth to transport water back to his own dying planet. And in interviews Roeg always refers to Newton as an alien. Whereas Bowie doesn’t seem so certain about Newton’s origins, or his mission. In the 1992 The Man Who Fell To Earth commentary, Bowie says, “Newton knows he’s going to be betrayed, it’s very obvious, but he seemingly doesn’t do very much about it. So he must be here for some other purpose”. As Bowie points out, there are Christ-like parallels. We can hypothesize that Newton’s falling to earth without any evidence of a space ship, is a kind of Immaculate Conception. And he arrives apparently a very pure being, who helps humanity advance and only seeks for himself a way to help his people. What are we to think is the “other purpose” for him being here? Perhaps he came, like Christ to test human-kind? And then of course there is the betrayal. But in the end Newton wasn’t born again. He becomes a ruined and lonely reflection of the contemporary culture of decadence and self-destruction.
______________________________
The majority of the footage used here is of course from The Man Who Fell To Earth. But in addition another approximately fifty video and audio sources were used.
Fourteen partial David Bowie tracks were used, as re-imagined parts of the movie soundtrack, and also fairly gratuitously as excuses to just add some rocking tracks that had new or revised videos put together for them.
All tracks and sources are listed in the credits at the end of the film. And listing them here would also be a kind of a spoiler – so let’s not do that!
Like a lot of my video projects, this thing happened by accident. Whilst I was working on the video for Subterraneans, I decided that it would be good to have an accompanying video that compiled in a very simple way, all the relevant interviews with Bowie where he talks about the film. I imagined that at most, it would be a thing of about 15 or 20 minutes. However, as is usually the case with me, I went very deeply into it, and found a lot more material than I bargained for. It quickly became clear that here was a great story that needed to be told in film, and the thing just kept growing in size and in complexity. In the end I have been working on it consistently and compulsively for the last 3 months and put in perhaps 700 hours of work.
And now I feel that I’ve done almost everything I can with the project, and I am reasonably satisfied it has some value, and I feel okay about sharing it. Showing it today to a friend, who was seeing it for the first time, I saw myriad ways it could be improved. There is always more that one can do, but at some point the line has to be drawn.
Hope you dig it!
I don’t own the rights, and I’m not making any money out of this etc. Just a fan making videos for other fans.