1. Dave Grohl
News broke this week that David Bowie refused the offer to work with Dave Grohl, making him one of the few musicians ever not to have collaborated with the Foo Fighters’ leader. To be fair, nothing has emerged featuring Grohl performing with Father Abraham and the Smurfs, either, though we’ve heard rumours there’s a bootleg on the internet of the Foos performing The Smurf Song with Father Abraham at the Amsterdam Paradiso, but without any actual smurfs on stage. Grohl approached Bowie two years ago, asking him to sing on a piece of music for a film. Bowie’s response: “David, I watched the movie and I got to be honest, it’s not my thing … I’m not made for these times. So thanks, but I think I’m gonna sit this one out.” Grohl replied, and received a response from Bowie: “Alright, well that’s settled, then. Now fuck off.” Perhaps Bowie was worried that him plus a hard rock guitarist might have resulted in Tin Machine 3.

(Since publication of this article, many of you have alerted me to the fact that Grohl and Bowie did in fact work together on Heathen and at Bowie’s 50th birthday concert. I am going to listen to The Smurf Song on repeat all weekend as penance. Apologies.)

2. Coldplay
You want your hero to appear on one of your songs. The natural thing to do is to send them a recording and then wait. Your preferred response would be an email a couple of hours later with a vocal already recorded and attached. Failing that, you’d settle for a note saying: “Schedule’s busy, but let’s try to find some studio time.” You could probably understand silence – after all, heroes are busy people. What you might want least of all would be for said hero to respond: “It’s not a very good song, is it?” Which of those do you think happened when Coldplay approached Bowie?

3. Scottish independence
The Brit awards are famed as a platform for hard-hitting political campaigns. Remember that time in 2004 when Liberty X used winning best British single to call for a thorough investigation of HMRC’s complicity in allowing major corporations to minimise their tax burden? But Bowie’s words at the 2014 ceremony still came as a shock. First, there was the fact that he wasn’t speaking them, delegating that task to Kate Moss – you don’t think Bowie would have contemplated turning up to anything so vulgar as the Brits, do you? Then there was the content of them. Alex Salmond and Nicola Sturgeon, consider yourself rejected. “Scotland, stay with us,” intoned Moss. And, lo, Scotland did indeed vote to stay part of the UK. 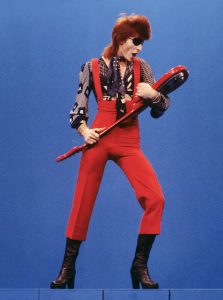 4. A knighthood
Bowie had already turned down a CBE in 2000 – “I seriously don’t know what it’s for,” he said – but Buckingham Palace doesn’t give up easily, what with the Queen being a huge fan of Bowie’s early-70s albums (she went off him a bit with Station to Station, but loves Low and “Heroes”). And so, in 2003, Bowie was offered a knighthood for having made “a major contribution to British life”. Again, he said no: “I would never have any intention of accepting anything like that. It’s not what I spent my life working for.” Imagine how Chris Martin would have felt if that was how Bowie had rejected the Coldplay song.

5. A Danny Boyle musical
Like all good and sensible musicians, Bowie was prone to saying no to requests to use his music. You have to, if you don’t want to see Life on Mars being used on confectionary ads, or The Jean Genie advertising Gap, or Always Crashing in the Same Car soundtracking Top Gear. But what if someone who is respected in their own field comes to you, saying they want to make a movie about you? Maybe a hugely well-regarded film-maker like Danny Boyle, who has a script by the equally well-regarded Frank Cottrell Boyce. You still say no. Boyle said Bowie’s rejection left him “in grief”.

6. Doctor Who
Peter Capaldi said last autumn that he wanted David Bowie to be a guest star in Doctor Who. He had no chance. Doctor Who composer Murray Gold told Den of Geek in 2013 of his encounter with Bowie at an ice cream stall: “I said, ‘I write music for Doctor Who,’ and he said, ‘I’m not doing it.’ I said, ‘What do you mean?’ and he said, ‘They want me to do it.’ I don’t know what it means, to this day, but that’s what he said. I don’t know in what capacity, as an actor or as a musician.”

7. Flight of the Conchords
The New Zealand comedy-music duo were longtime Bowie fans, having written the song Bowie in Space years ago, and when they began their own series for US TV, they wrote an episode in which they were to be visited in a dream by Bowie. And who better to play Bowie than Bowie? Through intermediaries, they approached him. As the Conchords’ Jemaine Clement wrote in the Spinoff: “The someone we knew talked to the someone they knew’s friend of someone who represented him and possibly approached him about it. And he (or quite possibly merely a representative) said that he’d just done Ricky Gervais and Stephen Merchant’s Extras and didn’t want to do another thing acting as a version of him. He’d rather just continue being the actual him. Fair enough, so would we. We wouldn’t be meeting our hero. Through the disappointment I was extremely relieved. As exciting as it is to meet your hero, the relief of not having to meet them is another, quite different and pleasant feeling.” 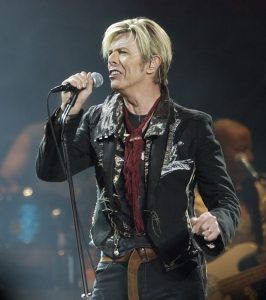 8. Red Hot Chili Peppers
The world’s premiere funk-metal band with socks on their penises revealed earlier this year that they had repeatedly asked David Bowie to produce them. “In the beginning we would call him, and he would say no, respectfully,” singer Anthony Kiedis said. “Then, later, we would write long emails explaining everything, and why it was time for us to really get our ships on and he always respectfully declined.” He said no “two or three times” Kiedis said, though Brian Eno has turned down the group eight times. Fellas, take a hint.

9. A Bond film
Bowie was a man with a firm appreciation of his own talents, and while he doubtless would have been able to bring suitable villainy to the role of Max Zorin in A View to a Kill – a role eventually taken by Christopher Walken – it was the downsides that turned him off. Not the prospect of acting opposite Roger Moore, who was 57 and distinctly unactionlike by the time the film was released, but the idea of whether it was the best use of his time. “I didn’t want to spend five months watching my stunt double fall off cliffs,” he said.

10. Puss in Boots
Bowie, famously, learned a great deal from Lindsay Kemp – the dancer, mime artist and choreographer. He studied with Kemp in the 1960s “I taught him to express and communicate through his body,” says Kemp. “I taught him to dance. I taught him the importance of the look – makeup, costume, general stagecraft, performance technique. I gave him books to read and pictures to look at. We talked about kabuki, avant gardists, the world of the music hall, which we were both attracted to.” They worked together on many projects, but some didn’t come together. As Kemp told the Guardian earlier this year: “One Christmas, I asked him to play Puss in Boots in Musselburgh. His agent came back and said that £10 a week wasn’t really enough – could I get it up to £15? Management said no, we couldn’t. What Musselburgh missed!”