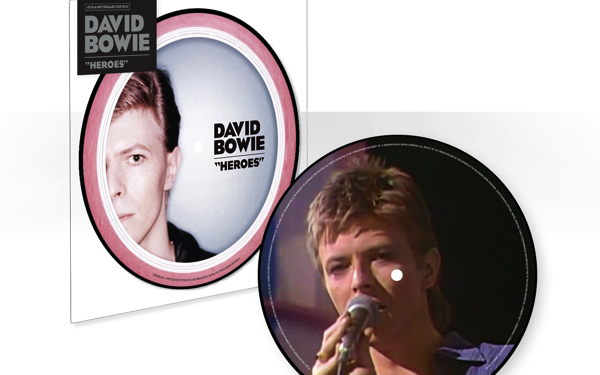 “We could be heroes…”

David Bowie‘s iconic single ‘Heroes’ is set to be released as a limited edition 7″ picture disc to mark its 40th anniversary.

The first single to be taken from the album of the same name, ‘Heroes’ remains one of Bowie’s most iconic tracks. This new release will see an AA-side picture-disc of the song hit shelves, with the single version of ‘Heroes’ backed by a live performance of the track, taken from Marc Bolan’s ITV show Marc – the song’s first ever public performance.

The picture-disc is set for a September 22 2017 release, one day shy of the forty-year anniversary of its original release date September 23 1977

It’s the latest in a long line of David Bowie vinyl repressings, following the singer’s death last year. Last week, a huge new box-set of his 1977-1982 releases was unveiled.

Following on from the previous box sets planned by Bowie himself with:

‘A New Career In A New Town’ will contain Bowie’s seminal ‘Berlin Trilogy’ of albums ‘Lodger’, “Heroes” and ‘Low’, as well as the classic ‘Scary Monsters (And Super Creeps)’ and much, much more.

Released on September 29, the eleven CD box, thirteen-piece vinyl set also features the ‘BAAL’ EP, the ‘Re:Call 3’ collection of non-album singles, single versions and b-sides, as well as the original and 2017 mix of the live album ‘Stage’.