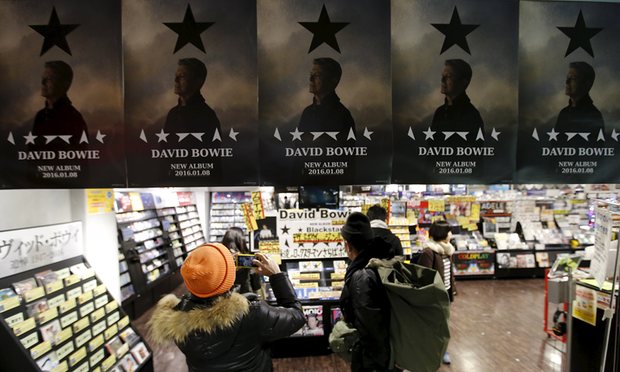 ★ Blackstar is David Bowie’s 28th studio album and his first since stunning the world in 2013 with the critically acclaimed The Next Day. The release date for ★ coincides with David’s birthday. The album’s title track is the first single, and is accompanied by a short film visual directed by the acclaimed Johan Renck. Music from the ★ single has been featured in the opening title credits and trailers for the new TV series The Last Panthers. The series, also directed by Johan Renck, began airing across Europe in late-October and will premiere in the U.S. on SundanceTV in Spring 2016. CD housed in a special 6 panel digipak design with 16 page color booklet with special varnish. In addition to the CD and digital albums, a special die-cut vinyl LP package will be available. 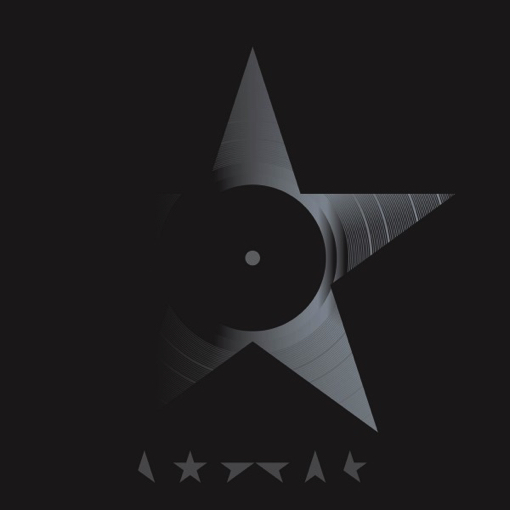 David Bowie: Blackstar review – a spellbinding break with his past

As he reaches his 69th birthday, David Bowie finds himself in a rarefied position, even by the standards of the rock aristocracy. He does not give interviews, make himself available to promote new releases, or explain himself in any way. He does not tour the world playing his hits. In fact, he doesn’t do anything that rock stars are supposed to do. It’s behaviour that theoretically means a one-way ticket to oblivion, with no one but diehard fans for company. But since his re-emergence from a decade-long sabbatical with 2013’s The Next Day, it’s proved a quite astonishing recipe for success. Bowie’s scant public pronouncements are treated as hugely significant. His releases are pored over in a way they haven’t been since the days when his army of devotees would turn up at Victoria station to greet him off the boat train, a state of affairs abetted by the fact that, since his return, Bowie has reverted to writing the kind of elusive, elliptical lyrics that were once his stock in trade. Dense with mysterious references, the words on The Next Day and its follow-up alike have far more in common with the impenetrable mass of signifiers that made up Station to Station’s title track than, say, the Dad-misses-you-write-soon message to his adult son of 2002’s Everyone Says Hi.
His 25th studio album concludes with I Can’t Give Everything Away, which seems to offer those attempting to unravel his lyrics a wry “best of luck with that” (“Saying no but meaning yes, this is all I ever meant, that’s the message that I sent”) while loudly trumpeting his own carefully maintained mystique. “I can’t give everything, I can’t give everything away,” he sings, over and over. It’s a beautiful, elegant song borne on clouds of synthesiser and decorated with a scrawly guitar solo, but it’s hard to avoid the suspicion that its lyrical admonishments aren’t going to make much difference: the bits of Blackstar that emerged in advance of the album have already been thoroughly examined for meaning.

The most compelling interpretation – bolstered by a remark made by Donny McCaslin, the New York jazz musician whose electro-acoustic trio forms the core of the backing band on Blackstar – is that the album’s opening title track is Bowie’s response to the rise of Isis. It seemed plausible: Bowie has always been fascinated both by messianic dictators – not least the relationship of their power to that of celebrity – and by the idea that the world is facing a future so terrifying that the thought of it, as he once put it, makes your brain hurt a lot. The theory was subsequently denied by Bowie’s spokesperson, which seems a shame: there’s a pleasing circularity to the idea of a muse that burst into life amid what the writer Francis Wheen called the “collective nervous breakdown” of the 1970s, apparently sparking up again amid the collective nervous breakdown of the present day.


But aside from Abu Bakr al-Baghdadi’s supposed elevation to the pantheon of Bowie bogeymen – thence to swap tips on global domination with Big Brother, President Joe and his murderous Saviour Machine, and the cannibalistic Hungry Men off Bowie’s debut album – and the reappearance of Thomas Newton, antihero of The Man Who Fell to Earth, amid the alternately gorgeous and unsettling drift of Lazarus, Blackstar frequently sounds like a slate-cleaning break with the past.

Bowie’s back catalogue is peppered with jazz-influenced moments – from his 1965 attempt to mimic Georgie Fame, Take My Tip, to Mike Garson’s improvised piano playing on the title track of Aladdin Sane, to his duet with Art Ensemble of Chicago founder Lester Bowie on the Black Tie White Noise track Looking for Lester. But Blackstar’s enthusiastic embrace of the genre feels as if it has less in common with his previous jazz dabblings than it does his headlong plunge into contemporary soul on Young Americans: designed as a decisive, wilful shift away from the past. Just as it seems highly unlikely that anyone who heard Diamond Dogs in 1974 could have predicted that, within a year, its author would be starring on America’s premier black music show, Soul Train, so it seems fairly safe to say that no one who enjoyed the relatively straightforward rock music of The Next Day thought its follow-up would sound like this.

Lazarus, from David Bowie’s last album, Blackstar
More striking still is the synergy between Bowie and the musicians on Blackstar. You can hear it in Bowie’s whoop as McCaslin solos amid the sonic commotion of ’Tis Pity She Was a Whore. He sounds delighted at the racket they’re creating, and understandably so. Simultaneously wilfully synthetic and squirmingly alive, it has the same thrilling sense of exploratory, barely contained chaos found on “Heroes” or Scary Monsters (and Super Creeps), or in the tumultuous, wildly distorted version of the Spiders from Mars that rampaged through Panic in Detroit and Cracked Actor. Better still, it doesn’t actually sound anything like those records.

And you can hear it by comparing the album version of Sue (or in the Season of Crime) with the single released in 2014. The earlier version felt like a statement rather than a song; a series of ideas (drum’n’bass-inspired rhythm, Maria Schneider’s high-minded, uncommercial big-band jazz, a fragmentary lyric) thrown together to let the world know that Bowie wasn’t done with being avant-garde yet. It did that job pretty well, but never became a satisfying whole. On Blackstar, however, everything coalesces. The rhythm is sample-based and punchier, the agitated bass riff distorted and driving, the seasick brass and woodwind arrangement is replaced by sprays of echoing feedback, electronic noise and sax. It sounds like a band, rather than Bowie grafting himself on to someone else’s musical vision. 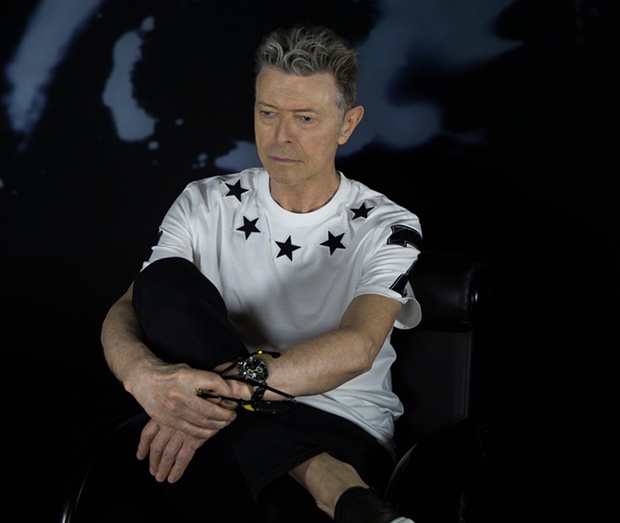 Over the years, rock has frequently reduced experimental jazz to a kind of dilettantish signifier: few things say “I consider myself to be a very important artist unleashing a challenging musical statement, I demand you take me seriously” quite like a burst of skronking free brass dropped in the middle of a track. But Blackstar never feels like that. Nor does it feel like it’s trying too hard, an accusation that could have been leveled at the drum’n’bass puttering of 1997’s Earthling.

Blackstar lacks the kind of killer pop single Bowie would once invariably come up with amid even his most experimental works – a Sound and Vision, a Heroes, a Golden Years – but only Girl Loves Me feels like a slog: lots of Clockwork Orange Nasdat and a smattering of polari in the incomprehensible lyrics, thuddingly propulsive drums, no tune. Instead, you’re struck by the sense of Bowie at his most commanding, twisting a genre to suit his own ends. Dollar Days might be the most straightforwardly beautiful thing here, a lambent ballad that doesn’t sound jazz influenced at all. But it’s lent a curious, slippery uncertainty at odds with the bullish lyrical pronouncements (“If I never see the English evergreens I’m running to, it’s nothing to me”) by Mark Guiliana’s drumming, the emphasis never quite landing where rock-trained ears might expect it to.

The overall effect is ambiguous and spellbinding, adjectives that apply virtually throughout Blackstar. It’s a rich, deep and strange album that feels like Bowie moving restlessly forward, his eyes fixed ahead: the position in which he’s always made his greatest music.