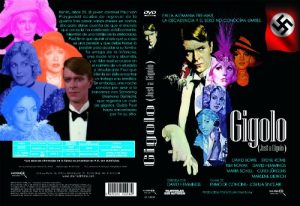 A Prussian officer (David Bowie) returns home to Berlin following the end of the Great War. Unable to find employment elsewhere, he works as a gigolo in a brothel run by the Baroness (Marlene Dietrich). He is eventually killed in street fighting between Nazis and Communists. Both sides claim his body but the Nazis succeed in capturing it and bury him with honours, “a hero to a cause he did not support”.[ 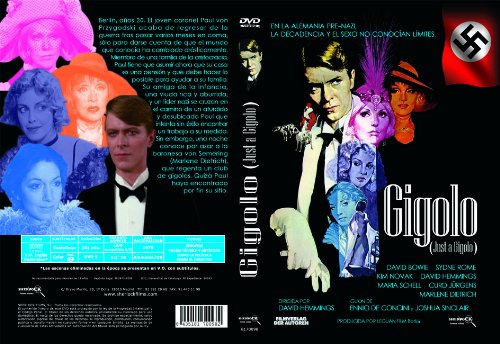 This offbeat German melodrama directed by David Hemmings stars David Bowie as Paul, a young Prussian War veteran who returns home to Berlin after World War I. After drifting from job to job, Paul eventually finds his niche renting himself out as a dancer for war widows who long to forget their sadness.
Kim Novak sizzles as a sad widow, with German bombshell Maria Schell as Paul’s mother and Sydne Rome as his old sweetheart-turned-cabaret singer. Marlene Dietrich makes a poignant cameo (it was her last film role) as an aging baroness, singing the (German) title song, Schoner Gigolo, Armer Gigolo.
This film was about Berlin, shot in Berlin and financed partly by Berlin. However, none of the principal cast were from Berlin, except for Marlene Dietrich a native Berliner, who was filmed in Paris but editing makes her seem to be in Berlin with David Bowie. German Press claimed she was paid $250,000 for two days’ work.

Marlene Dietrich
Few people in or out of the film industry found it easy to believe producer Joshua Sinclair when he announced to the press, late in 1977, that Marlene Dietrich was about to break her retirement and self-imposed isolation within her Paris apartment.
She had, Sinclair continued, agreed to appear on screen in her first speaking role in eighteen years, in the German-English film Just a Gigolo, with rock star David Bowie. Lonely for precisely the human contact she paradoxically but insistently rejected, she also found irresistible a salary of $250,000 for two half-days of work in a Paris studio, to which the sets for her scene would be transported from Berlin
On a bitterly cold morning in February 1978, she arrived on time for work, ‘her jaw set and her shoulders hunched with determination,’ as an eyewitness recalled. Dietrich walked slowly, unsteadily, because of her failing eyesight, clinging constantly to the arm of make-up artist Anthony Clavet. She looked, quite simply, like a wizened old lady.
Two hours later, her make-up painstakingly applied, she emerged from a makeshift dressing room wearing a costume of her own design: a wide-brimmed black hat with a delicate but strategically concealing veil, shiny black boots, white gloves and a black skirt and jacket – everything just right for her brief appearance as the Baroness von Semering, manager of a ring of Berlin gigolos just after the First World War.
Director David Hemmings, producer Sinclair and a small crew awaited, and in a few moments one of her two brief scenes were easily photographed
Next morning, Dietrich returned for the more difficult second task – to sing the film’s title song, which was to be heard near the end of the picture. ‘I will sing one chorus of that horrible old German song in two seconds flat,’ she told Hemmings and Sinclair. Everyone stood by nervously, for it was uncertain she had the strength or the breath to fulfil the promise.
But an astonishing transformation then occurred, attested by those present in the studio that wintry day. First she was photographed in close-up, the hat and veil deliberately almost hiding her eyes as she stood to one side of the set, an empty hotel dining room.
Then she walked – cautiously but unaided – towards pianist Raymond Bernard, and standing proudly, she began to sing. Far from offering the perfunctory delivery of a song she disliked, Marlene Dietrich sang with heart-rending simplicity:

Just a gigolo: everywhere I go
People know the part I’m playing
Paid for every dance, selling each romance
Every night some heart betraying
There will come a day youth will pass away,
Then what will they say about me?
When the end comes, I know,
They’ll say ‘Just a gigolo,’
And life goes on without me

Nothing she had done on stage or screen over a period of sixty years could have prepared witnesses that day (or viewers of Just a Gigolo since then) for her astonishing rendition of this simple confessional songs. On the words ‘youth will pass away,’ there may be heard a tremor of sadness in her voice that was without precedent in any prior recording or theatrical appearance – a moment of exquisite pathos too genuine to have been concocted from the usual counterfeit emotion.
And when she came to ‘life goes on’, the voice became plangent, almost a whisper as she managed, to poignant effect, an octave. In only one take, the scene and the song were captured forever. There was a moment of reverential silence round her, and then the bystanders broke into applause; many of those who knew her films, recordings and live stage appearances could be seen brushing away tears.
Unable to see them across the bright studio lights, Marlene Dietrich, in her seventy-seventh year, nodded and found her way back to the cramped dressing room. An hour later she was alone again, back at her apartment on the fashionable Avenue Montaigne, just opposite the grand Plaza-Athenee Hotel*.
Except for a very few visits to doctors and hospitals, she never again left this residence.