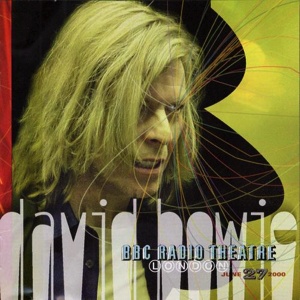 iso4yl Mar 04 2012
Sounds like it was quite a show: impeccable performances in a small club. The only thing I could ask for is more; surely this fanclub invitation-only, by-lottery show — to which lucky winners travelled from all over the world — was longer than 73 minutes. The tracks are well-sequenced, but momentum is lost by fading between them. The overall result is sonically great but somewhat lacking in energy, just like the otherwise-excellent ‘Hours…’, his most recent studio album. Should not be out of print! This is right around the time when Bowie’s later-career resurgence really started to take off.

nalex21 Apr 04 2010
In a two week period in June 2000 I went to three Bowie shows, first at Roseland in New York, then Glastonbury but being invited to this intimate show was simply the most extraordinary privilege. And it is a very fine recording. Hope it is re-released. Definitive.

Smelsch Dec 20 2009
This live performance gives us the 1st inklings of what Bowie would serve up with ‘Heathen’ 2 years down the track, and thus is an important final step in Bowie’s rehabilitation and recovery from his 80’s horrors. Gone are the avante-industrial dance experimentation of ‘1.Outside’ and ‘Earthling’ as well as the syrupy lack of substance that epitomised ‘Hours’.

Occasionally Earl Slick and the band get away from him (most obviously on ‘Cracked Actor’), but he keeps them reigned in and on task pretty well for the most part and on occasions they really do take off, like on the incendiery version of ‘Stay’.

Great sound, nice setlist. Well worth getting if they ever bother releasing it again.

Kitca Jun 04 2009
Great looking set list, a little too glossy but over all good sound, the playing is solid…

…but the back-up singer that is way up front in the mix, most of the time louder than David, ruined this for me.
Published
[Rating13125024]
ProfessorT Feb 03 2009 5.00 stars
This is such a great live album, which unfortunately isn’t available any more. If you’re a Bowie fan (any era, it doesn’t matter) I strongly urge you to “acquire” it.

I remember the day my brother came home (circa late 2000) with the Bowie At The Beeb box set with this included as a bonus disc. The only Bowie I knew back then was “The Man Who Sold The World” from Nirvana’s version. I listened to both of The BBC sessions discs over the next few days (we shared a room so I had no choice) and almost immediately became a Bowie fan. I remember recording a 90 minute cassette for my walkman of the songs I liked from both of those discs and having room at the end of the tape (those were the days, eh?) so I investigated this “third disc” to see if there was anything decent on it. Pretty much the entire disc was decent.

In later years I would always come back to this album and rediscover it. After purchasing Low one or two years ago I remember recognising the song “Always Crashing In The Same Car” then realising it was on this CD that I had heard it first (and what an amazing live version it is). “Let’s Dance” has never sounded better. “Seven” is an excellent ballad from late 90’s era Bowie. And pretty much every other song is outstanding.