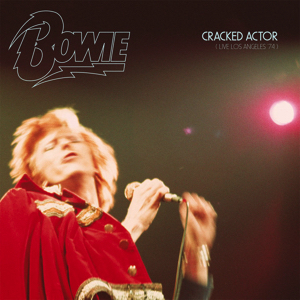 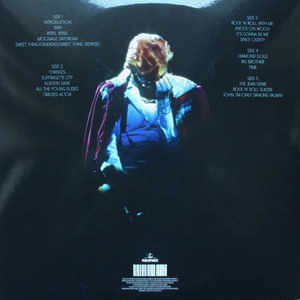 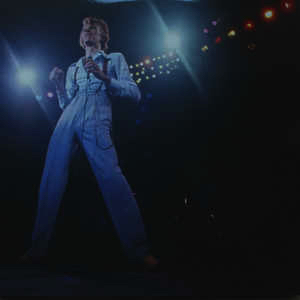 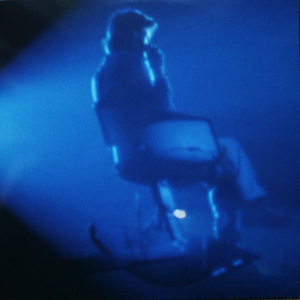 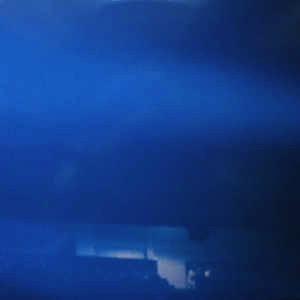 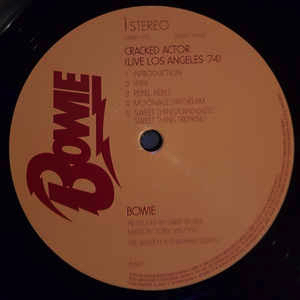 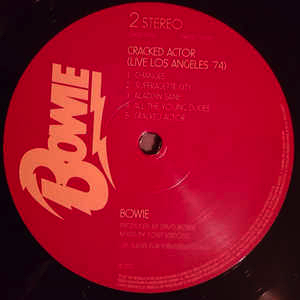 This live album is culled from a show late in David’s Bowie’s 1974 tour. It’s heavy on material from Diamond Dogs and Aladdin Sane and finds a drug-addled Bowie in a moment of transition.

The 1975 BBC documentary Cracked Actor captured David Bowie at his lowest point, hollowed out so exquisitely by drugs that you wince to look. Riding a limo through the California desert, he mouths Aretha Franklin’s’s “(You Make Me Feel Like) A Natural Woman” like someone half-starved: a dark speck adrift in a blank landscape. “Since you’ve been in America,” the director Alan Yentob ventures, “you seem to have picked up a lot of the idioms and themes of American music, American culture. How’s that happened?” Bowie peers down at the carton of milk he’s been drinking from, and mentions the fly floating around there—a “foreign body,” just like him, gorging on the scenery.

Cracked Actor documents the Diamond Dogs tour, which posed glam rock’s dying form in angles of severe decadence. Bowie spent millions of dollars on the sets, among them a nightmarish cityscape and glass-walled “asylum.” He sashayed along moving catwalks; he sang “Time” sitting cross-legged in the palm of a giant hand. Psychedelic Dietrich. The cocaine mania is still visible: such brittle abandon, so many fleetingly brilliant ideas. “Cracked Actor” the song, one of Bowie’s cruelest lyrics, describes a former movie star sniping at his prettier hirelings: “Forget that I’m fifty, ‘cause you just got paid.” On the Diamond Dogs tour, Bowie reduced this exchange to abstraction. He would do “Cracked Actor” wearing shades and holding a skull, eventually making out with the prop.

It was one of the only times Bowie seemed uncertain about his next self. Midway through his scheduled 1974 dates, he dumped the elaborate theatre (imagine those dystopian facades rusting in the sun) and rebranded as the Soul Tour. Bowie’s first live album, David Live, was taken from that first half of the tour, but the recording process went badly wrong, forcing various players to overdub their parts in the studio; its final mix muffles all but the flimsiest noise. A damp jog would feel more intense than this “Suffragette City.” Bowie even grew to hate the cover, where he looks barely capable of holding up a microphone—he later joked that David Live should’ve been called David Bowie Is Alive and Well and Living Only in Theory. With the new live album Cracked Actor, produced by Tony Visconti, Bowie’s longest-running collaborator tries to reconstruct that time, a moment of grand ambivalence.

Cracked Actor the album and Cracked Actor the film draw on the same recordings, as if each were miming shadow puppets against a common light. Fans have bootlegged the show for almost three decades now—anyone could make this material sound better than David Live. Hearing drums here distinct from murk, you can tell how complex the rhythm of “1984” was, its groove swerving in circles to welcome every new element. Bowie spent the mid-‘70s obsessed with power, wielding it through deeper and deeper timbre, until his seductions seemed purged of emotion: a ballad sung by a vampire. Cracked Actor shows he was already using his phrasing to command attention. “Moonage Daydream” finds him slinking around like some cabaret diva, his voice alternately a pout, a gasp, and a broken squeal. “The Jean Genie” begins with Bowie at a diffident snarl, sliding lyrics along the lone guitar as it trembles in response. He sings the line about underwear, and the crowd whistles.

The few Cracked Actor tracks considered for 1975’s Young Americans got cut from the final release, but it could be a premonition of that album. Bowie had changed his band mid-tour trying to approximate R&B, adding extra backup singers and the endlessly nimble guitarist Carlos Alomar. The bulk of the setlist draws on his last two glam-era records, neither of which were terribly coherent to begin with: Diamond Dogs especially resembles a paranoid collage, thrown together from disparate sources, including a 1984 musical vetoed by Orwell’s estate (rather too perfect given the author’s contempt towards “fashionable pansies.”) That allows the musicians to insert funk riffs or piano flourishes at will. Horn parts first recorded with blown-out, raucous production swoon and beguile. He always did hire the best. Bowie studied genres like captivating faces—the most devoted mimic a girl could hope for.

“John, I’m Only Dancing (Again)” was such a strange gambit in 1974 that it only got released five years later, when every white anglo wanted to record disco singles. Closing out Cracked Actor, the song might be heard as a knowing joke, the parable of the horny bisexual: “If he gives it to you/He’d better take it from me.” In Alan Yentob’s documentary, Bowie sings it to no one and everyone, flicking his hair around. But that groove just keeps going, swiveling towards infinity, as backing vocals collapse his denials into a single word: “I’m dancing, dancing, dancing…”. The mask has splintered; the smile is helpless with yearning.

A previously officially unreleased live recording from Los Angeles on 5th September, 1974, between the Diamond Dogs tour and the Philly Dogs tour. Produced by David Bowie and mixed by Tony Visconti at Human Studios, NYC in October/November 2016. 3 LP set with etching on sixth side.

Recorded live at Los Angeles Amphitheatre, L.A. California, USA 1974, September 5, as part of the BBC coverage of Bowie’s 1974 tour and then current period. Some recordings and footage from the concert were first broadcast in 1975 on the BBC TV special “Cracked Actor”. In 1990 the professionally recorded tapes were first made available unofficially in a different mix than the one included on the official release. There is a myriad of releases, including some that contain the full intro (here reduced to less than two minutes), and more of the stage commentary from Bowie himself than is included on the official release. See Bowie* – Strange Fascination for the master release of the unofficial releases.