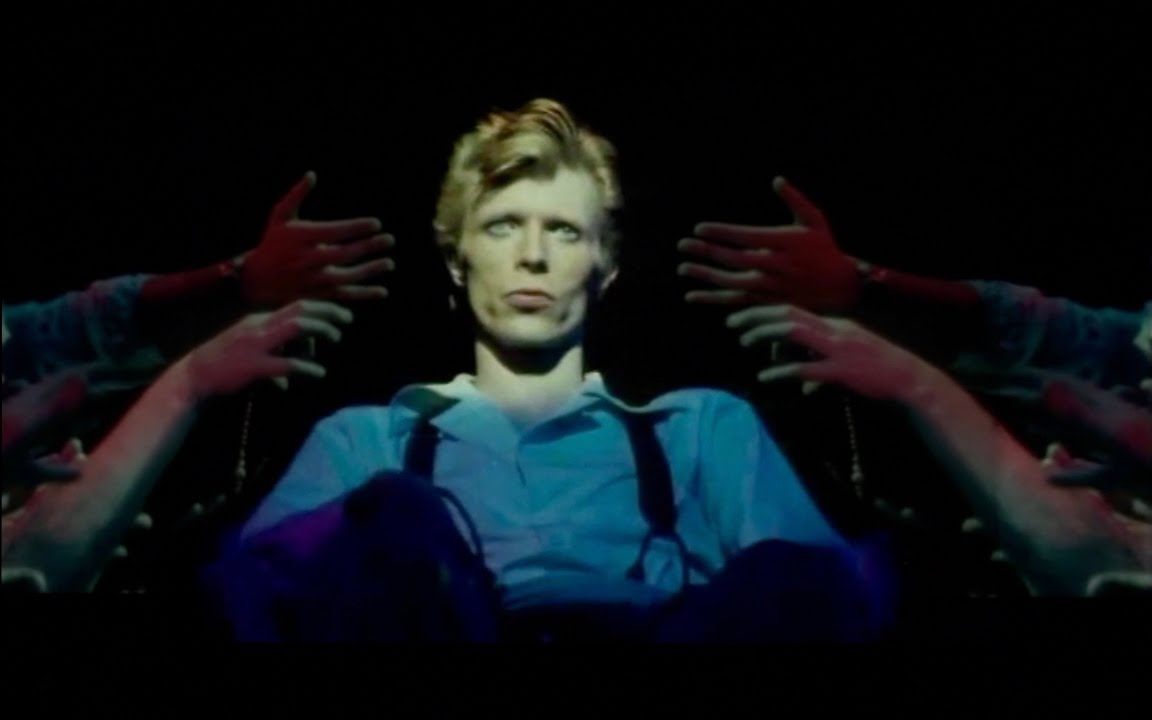 Space Oddity was originally recorded on the 20th of June 1969, and released, less than 3 weeks later (those were the days!) in early July of that year.

It was included on Bowie’s 2nd album, called David Bowie, in the UK and, Man of Words/Man of Music, in the US. Later, it was reissued in 1972, with the familiar Ziggy-era look of Mick Rock’s video and accompanying cover photo as, Space Oddity.

Space Oddity was reissued as a single several times in the 70’s and was in and out of the charts and radio play-lists, throughout the decade. Like a lot of my generation, it was the first Bowie song I became aware of as a youngster. When I went looking for a Bowie record that contained Space Oddity – there it was – lead track on ChangesOne. And the rest of course is (my Bowie) history.

Space Oddity was performed on the 1974 Diamond Dogs tour. It was included in the set because Bowie was keen to break America and this was a song people knew, unlike the fairly new ‘Dogs material.

He performed the song above the audience, in a chair mounted on the moving hydraulic arm of a cherry picker. The cherry picker emerged from a pair of doors atop one of the “Hunger City” towers (the one with the phallus) and went out over the first six rows of the audience. It is likely people heard the familiar “Ground Control to Major Tom” opening line, before they realized where Bowie was. As the song came to an end, the chair would return to its position and the final note would see Bowie feign death with his head slumped, before the stage was plunged into darkness.

The audio used here is from the Tower, Philadelphia in July 1974, and is included on the 2005 remastered David Live album. Like most of the songs on the tour, once one gets used to the soulful and jazzy rearrangements, there is so much to enjoy in the performance, with great playing by the band, and a fantastic vocal by Bowie.

I sent a preview of this video to Mike Garson. Mike was keyboard player on this and many recordings and performances, throughout Bowie’s career. Mike is a super cool guy, and has been very supportive of my Bowie video’s. He was good enough to respond:

“Over the last year I’ve gotten to know the video editing work of a great Bowie fan who goes by the name of Nacho. He’s shared with me this great edit of this live performance from back in 1974. I was so excited to add piano to this version as the original had none. I also got to play mellotron which was a special instrument that the Beatles also used. It’s very emotional to see this. David was so loved by his fans and still is – in a very deep way, unlike many other great icons. Please enjoy…”

The footage used here, is from the Universal Ampitheater, Los Angeles, on September the 5th, 1974. It comes from Alan Yentob’s excellent 1974 BBC documentary on Bowie, Cracked Actor. Evidently, Yentob really knew what he was doing and for the most part Cracked Actor has really stood the test of time.

The original 1969 audio was dubbed over the Space Oddity footage. And there is the use of, what seems now, dated-looking “special effects” of superimposed flying-through-the-air footage. Was it an attempt, by the BBC editors of the day, to make up for what may have seemed to them, the fairly ludicrous spectacle of a distant and wasted looking man, apparently talking into a large red telephone receiver, sat in a plastic chair, mounted on a hydraulic arm, hoisted above the from rows of the audience? And was the audio redubbed because on the performance of Space Oddity the vocals sound flat and tinny? This may be due to the limitations of the radio mic, hidden in the telephone receiver that Bowie sang into. But also, to me his singing on the L.A. version also sounds rather cursory and disinterested. So one could speculate if after two months of performing the show, he was by now becoming bored of sitting in this tin-can, far above the audience, singing this old material, and would perhaps rather be back on stage moving to the newer stuff?

Anyway, like those BBC editors over 40 years ago, I’ve tried to squeeze the most out of the material. I’ve embellished it with other moments from the Cracked Actor footage – mostly utilizing enthusiastic spaced-out, young audience members, gazing up adoringly at our somewhat lost and aloof looking Major Tom.

Hope you dig it!

Thanks to SK for the video, and to Chris @ www.theyoungamerican.co.uk for historical info.

Do me an’ yerself a favor – watch it in the H’est D available, with the sound UP LOUD!

If anyone has any other footage, or ideas for another video project, of material from Bowie’s classic period, do please get in touch: [email protected]

Putting this video together was another huge labour of love, made with respect for the source.

I don’t own the rights, and I’m not making any money out of this etc. Just a fan making videos for other fans.