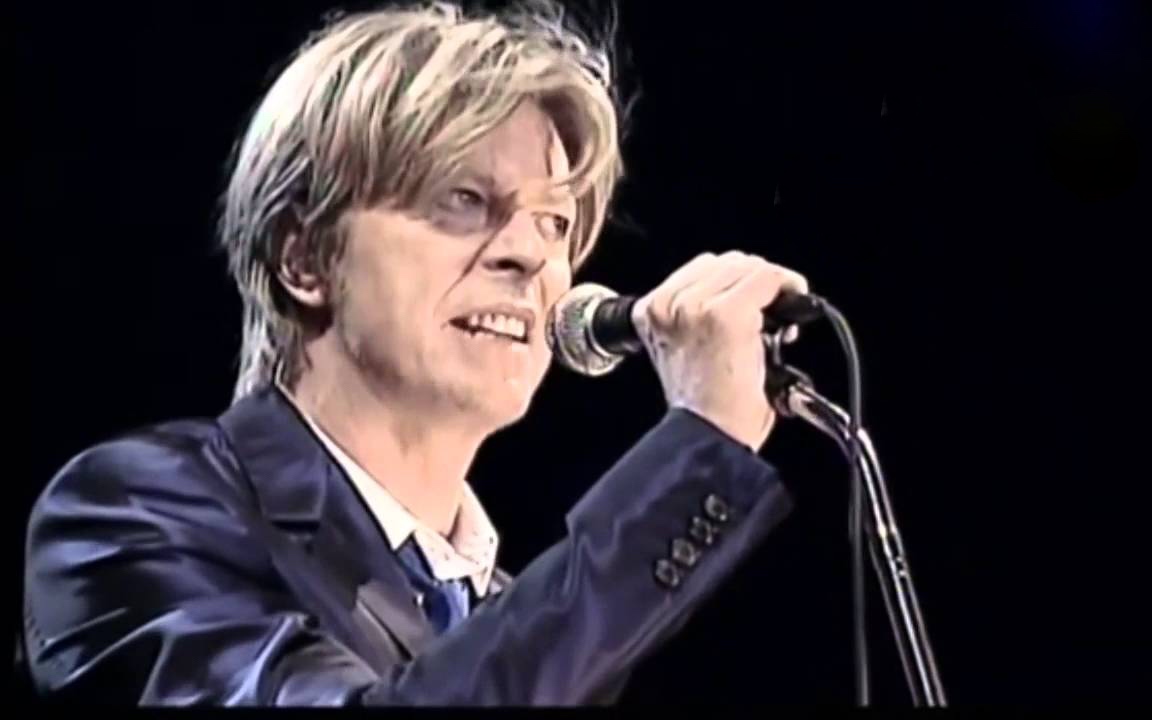 The following is a transcript of an interview which featured on Australian Current Affairs show “60 Minutes” just recently. And when old Charlie brought up the topic of young fans, Dave was even happy to mention Labyrinth, a topic skirted in the past, but put in good humour by a very retrospective and jolly Dave who has mellowed amazingly since the release of Heathen. I have highlighted this part in yellow. This is a good interview, the questions are a bit fuddy-duddy for the olds that usually watch this show, but it is breezy and enjoyable. Bozza looked gorgeous relaxing with a fringe and short-sleeved blue strippy t-shirt backstage in Paris.

CHARLES WOOLEY: He rose to fame as the fabulous illusionist of rock. Ever changing, always outrageous and more bizarre by the moment. But these days, David Bowie has morphed again. This time, into a new, more down-to-earth role, that of a happily married, middle-aged dad.

Is it true that you aren’t very fond of changing nappies?

CHARLES WOOLEY: Can you count the number of nappies that you’ve changed?

CHARLES WOOLEY: Because my wife, she could count the number of times.

DAVID BOWIE: It is a bit like that with me. I think I’m there for when it’s walking and talking. I mean, I read to her all the time and I kind of try and introduce her to new things and get her excited about stuff, you know — both my wife and do I that — but I’m much happier in the capacity as mentor.

CHARLES WOOLEY: For Bowie, the marriage to supermodel Iman is his second. He lives in New York with the Somalian-born beauty and their baby Alexandria. His lyrics are still dark, but at 55, Bowie is rich, comfortable and in remarkable health for one who was once so hopelessly addicted to cocaine and alcohol.

CHARLES WOOLEY: Is it true that you haven’t had a drink or you haven’t taken anything for 20 years?

DAVID BOWIE: Absolutely. I’m a clean machine, yeah, very. Coffee is really a tough one and more recently, I’ve kind of knocked cigarettes on the head. Do you know what — that’s tougher than any of them. Woooh, nicotine, forget about it.

CHARLES WOOLEY: Professionally, as well as personally, David Bowie is a survivor. He’s been performing now for nearly four decades with no inclination to retire. He’s just launched a new album, Heathen, and while many of his old rock peers have faded away, Bowie’s music and style is still contemporary and endlessly emulated and analysed.

As a writer, are you often amused by the way people deconstruct the lyric and find meaning in it that you didn’t maybe mean?

CHARLES WOOLEY: Do you accept it if it is a good read or reject it if it …

DAVID BOWIE: I do. Frankly, I mean, sometimes the interpretations I’ve seen on some of the songs that I’ve written are a lot more interesting than the input that I put in.

CHARLES WOOLEY: Such as?

DAVID BOWIE: No. (Laughs) I don’t want to take the mystery away, yeah.

CHARLES WOOLEY: For a man who has helped change the face of modern music, David Bowie had fairly uninspiring beginnings, growing up in bleak and battle-scarred post-war Britain.

DAVID BOWIE: Yeah, it was. I think it probably did influence a bit of the writing in that way. It’s interesting, you know, when I first went back to have a look at the World Trade Center area, that was the one thing that struck me about it, is I thought, Oh, my God, it looks like London’s East End when I was a kid. That’s what it looked like when I was about seven. Then it brought it all back, what London was like in that particular time. And it was grey and it was a pretty poor place in those days.

CHARLES WOOLEY: Like so many of his generation, Bowie was seduced by all things American, but most importantly, by the music.

DAVID BOWIE: When I heard Little Richard, I mean, it just set my world on fire. I thought, wow, what’s this got to do with me or London or … But I want a piece of that. That’s really fantastic. And I saw the sax line-up that he had behind him and I thought, I’m going to learn the saxophone. When I grow up, I’m going to play in his band. So I sort of persuaded my dad to get me a kind of a plastic saxophone on the hire purchase plan. You know, sort of those hire purchase plans they had in those days: HP.

DAVID BOWIE: About what … three bob a week or something for the saxophone. And really, that sort of was my start into music.

CHARLES WOOLEY: That was a great investment that your dad made.

CHARLES WOOLEY: In the course of events, it was one song that changed David Bowie’s life. The release of ‘Space Oddity’ in 1967 saw his career lift off. But it was the landmark Ziggy Stardust album of the early ’70s that launched Bowie into the stellar orbit of rock superstardom. So began a crazy, drug-filled ride that was to redefine modern music. Along the way, the strangely androgynous Bowie invented glam rock, helped launch heavy metal and disco and even inspired punk. Let me take you back to the ’70s …

CHARLES WOOLEY: Just for a moment.

CHARLES WOOLEY: You shocked parents and they were disturbed about their kids watching the trans-gender thing. Now, those same kids have kids and they’re worried by the antics of Marilyn Manson.

DAVID BOWIE: Yeah, I think actually the worries are slightly different these days. I think they’re not so … You know, rock-‘n’-roll doesn’t have the same currency now as it had then. I think the biggest frightener now is the disturbing lack of interest in … among a certain proportion of younger people, a lack of interest in … no curiosity in what’s going on. Kind of a … the idea, the fashion, the fashionable dumbing down of a generation, I think, is more of a worry. Because I remember — it’s not like that’s an old fuddy duddy way of thinking — but I remember when I was a teenager I felt much the same. I mean, I used to get really pissed off when people were just like purposefully dumb, it seemed, and didn’t have an interest in this. And I fell out with many musicians for the same reason. “Oh, I don’t need to, don’t want to.” You know, and it was like then, “Well, go away.”

CHARLES WOOLEY: He survived the worst excesses of the rock ‘n’ roll lifestyle but only just. When it was all over, Bowie landed with a thud. Hopelessly addicted to drugs and alcohol, he’d almost self-destruct.

DAVID BOWIE: It’s a bit like taking a chance on a rocket ship. You know, it might be and I can’t avoid the fact that some of it was terribly exciting, but it’s … if you get on that rocket, it’s very likely to explode under you and you’ll die, you know, so it’s the kind of you’re taking a real chance by doing it.

CHARLES WOOLEY: The writer Norman Mailer said that alcohol gave him as much as it took from him. Do you feel the same about drugs?

DAVID BOWIE: That’s an interesting point, that could well be true. Reluctantly you have to admit it. I think it can open up channels of imagination that maybe were closed to you, but the interesting thing is, once they are open, if you’ve got your wits about you, you can keep them open.

CHARLES WOOLEY: While Bowie beat his drug habit, there is another enduring problem he has been unable to overcome — a simple fear of flying.

Where does this fit into your life?

DAVID BOWIE: It allows me to just write about space as opposed to going into it.

DAVID BOWIE: I got the train, mate.

CHARLES WOOLEY: What do you feel as the plane takes off?

CHARLES WOOLEY: You know the actuarial figures; you’re a businessman these days.

DAVID BOWIE: I know, I know.

CHARLES WOOLEY: You know that it’s safer to get in a plane than to drive a taxi across town.

DAVID BOWIE: I know. Isn’t it ridiculous? It’s absolutely ridiculous. I guess with, you know, the confluence of recent events have really sort of indicated to me that if I’ve got the chance to take the boat then I will.

CHARLES WOOLEY: Having made his musical mark, Bowie went on to explore new, creative frontiers. He became an actor, and quite a good one. Meanwhile, Bowie continues to win over a new generation of fans. My nine-year-old son wanted me to be home and I said, “I can’t. I’ve got one more interview to do.” And he said, “Well, who is it?” I said, “It’s nobody you’ve ever heard of. It’s David Bowie.” And he said, “David Bowie? That’s really cool.” A nine-year-old …

DAVID BOWIE: Actually, there is a generation that kind of know about Labyrinth, which is the kids’ film I made. Kids are brought up to me and their mums say, “This is Jareth, from Labyrinth.”

[NOTE: At this point they chose to play the “Goblin Babe” part of the movie to go with the interview hehe]

What about a knighthood? Do you think you might get a nod from the Queen?

DAVID BOWIE: I very much doubt it. I think I’ve made …

CHARLES WOOLEY: Some bad boys have got knighthoods.

DAVID BOWIE: I think I’ve made my feelings about it very clear. I’m just an individual who doesn’t feel that I need to have somebody qualify my work in any particular way. I’m working for me.

CHARLES WOOLEY: David Bowie is at peace with himself. After decades of publicly confronting his demons, and, in the end, overcoming them, he seems happy to be a private person, and musically this elder statesman of rock is happy to suit himself.

DAVID BOWIE: I think it all comes back to being very selfish as an artist. I mean, I really do just write and record what interests me and I do approach the stage shows in much the same way. It’s the old adage — I mean, you can’t please all the people all the time, so you just don’t try. So I have to please myself first, and if I’m happy, my presumption is there’s going to be a certain amount of people that will be happy too. That’s my way of working now. It’s all about me. (Laughs)