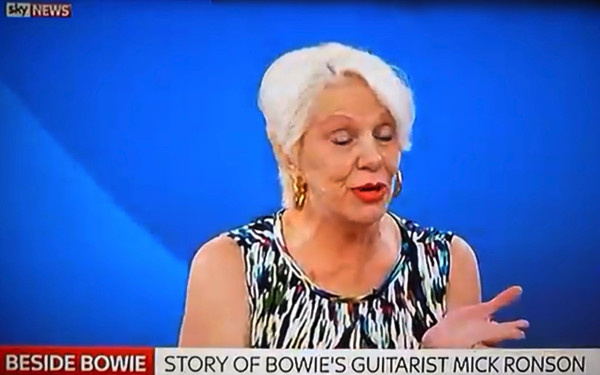 A rock ’n’ roll night to rival the good old days last night, as the premiere of a new documentary about David Bowie and his guitarist brought out the hedonist in guests at the May Fair Hotel. There wasn’t quite dancing in the street but guests certainly bopped in the corridors.

A motley crew including singer Sinitta and lawyer Nancy Dell’Olio arrived at the hotel to see Beside Bowie: The Mick Ronson Story, a film by Bowie’s former manager Jon Brewer. Ronson was the guitarist from Bowie’s Spiders from Mars era.

Angie Bowie, former model and the late singer’s ex-wife, was in a suitably anarchic mood. “I’m too hot for this hat!” she exclaimed to The Londoner as we tried to chat. Then, as we entered the auditorium and got settled, Angie had other ideas. “I need to get out of here now,” she shouted, scattering the crowds taking their seats. “I can’t stay there,” she said. “I’m claustrophobic.” (She did, let’s not forget, spend three weeks in the Big Brother House.)

Luckily she felt better in time for the after-party, and held court in the corner booth. When artist Daniel Lismore arrived she found a partner in crime: the pair ran up to her room, causing mischief on the way up. “It’s just Angie being Angie!” Brewer said with a smile.

But it’s not a truly rock ’n’ roll bash without a casualty. Liz Brewer, etiquette expert and sister of Jon, took a severe tumble on the hotel steps on her way home and is now recovering in the Chelsea and Westminster hospital. “Morphine is overrated,” she told us from her sick bed.