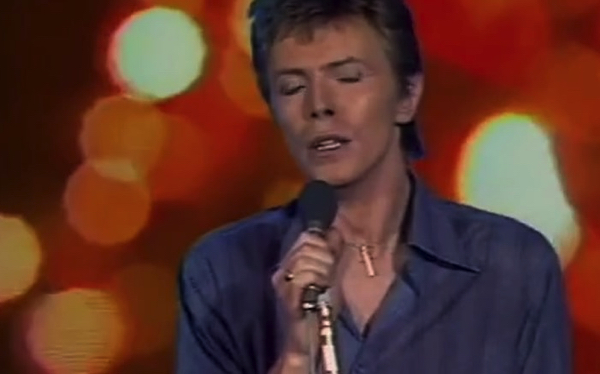 “Heroes” was originally released as a single in September 1977 and was then subsequently a track on David Bowie’s “Heroes” album, released in October 1977.

The “Heroes” material was remarkably quickly recorded (usually in one take) and mixed in August 1977. Then the album and the single were released equally swiftly, in September and October respectively.
During those two months, Bowie undertook a short promotional tour, recording TV shows, where he performed “Heroes”. During the same period, Bowie also shot the Stanley Dorfman directed, “Heroes” video.

Like the Dutch appearance, here Bowie is singing live – and what a remarkable vocal performance it is!
I confess, I had previously not paid much attention to the French show before, because the sound quality on the existing video online is so poor.
For a start, it’s playing at about 10% too slow, and therefore sounds very flat. Also, the music is very low in the overall mix, with Bowie’s vocal dominating. Another issue is that the audio is slightly out of sync with the video. But the main thing is that the audio is just so damn quiet, as to be almost inaudible. I think the reason for this is that when Bowie lets rip with his vocal, the levels literally go right off the meter. Therefore perhaps the French engineers simply turned down the entire track, so as to contain the very loud peak moments. Listen to him at around 2:00; his “Iiiiiiiiiiiiiiiiiii-yah! (I can remember)”, is incredible! On the original audio, it is literally twice as loud as the rest of the song, and jumps way into the red, into distortion.

I don’t know what audio processing equipment they had in those days, but now it’s relatively easy to make improvements, by adding some judicious EQ, and in this case some compression to even-out the sound levels, without killing the vibe.

Also, I have extended the beginning of the video. On the original, the hosts of the show are seen and heard, talking over the beginning of the track, just before Bowie starts to sing. So I have mixed in the 7” version of the track to replace what was there in the original. I had to modify the 7” audio to make it a believable match – I turned it into mono (the recording of the show is in mono), and downgraded the sound with filters, to try to make a match, with only partial success, as you will be surely be able to hear. I also extended the beginning of the footage, so that we only get Bowie and no babbling Frenchmen! – and I bet you can’t find the join?!
One more thing – In the performance, we don’t really get to fully take in the magnificent calf-length mountain boots Bowie is wearing! So at the end of my video, I have grafted on the start of the interview with the host, Michel Drucker, that was on the original TV broadcast. Here the boots can be clearly seen!

Bowie is greeted by Michel Drucker, he sits down and crosses, and then re-crosses his legs, showing off the boots.

It’s a pretty nice interview too.