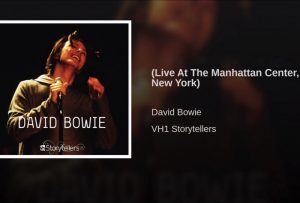 Featuring intimate performances accompanied by personal stories and recollections by a diverse array of top music stars, each one-hour episode of “VH1 Storytellers” takes viewers behind the scenes with a single artist or group, including Ray Davies (whose 1996 appearance launched the series), Elvis Costello, Coldplay, R.E.M., Pearl Jam and Kanye West. To date, more than 60 episodes of “VH1 Storytellers” have aired on VH1.
“We were used to dealing with legendary musicians,” says “VH1 Storytellers” Executive Producer, Bill Flanagan, in his liner notes essay for the new Bowie release. “Still, landing David Bowie was more than a big booking. There’s no way to say this without being corny: it was an honor. Bowie has a unique place in rock & roll. He is not only one of the most influential musicians of the era, he does nothing unless he is fully committed. He never phones it in.”

Flanagan continues, “Bowie’s ‘Storytellers’ was a unique theatrical event, a sort of off-Broadway ‘Evening with the Artist’ in which a great songwriter used bits and pieces from his life and career to show us all the roads leading up to a single moment, a complement to his current album but also a performance strong enough to stand on its own: a compelling introduction to David Bowie for the uninitiated and a fresh experience for the long time fan.”