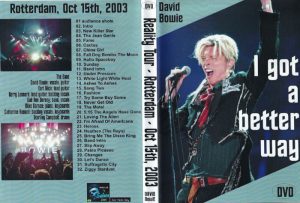 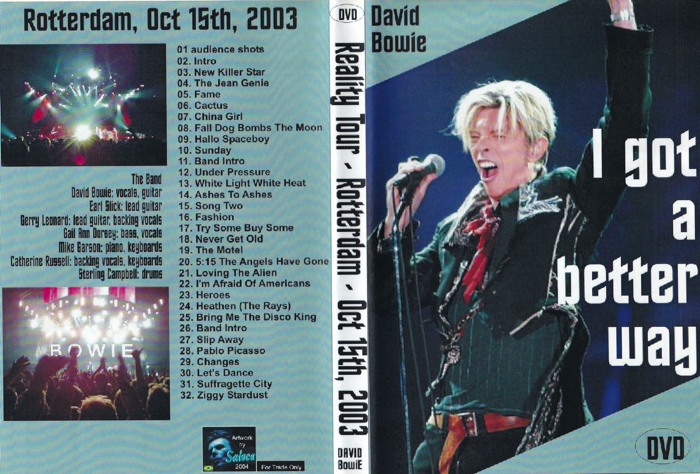 Again Bowie is in a very good mood, giving a great performance for an enthusiastic crowd. Together with Glasgow and Antwerpen I consider this concert among the best of the 1st European leg of the Reality Tour.
Please note that there are better recordings of the Reality Tour, however the atmosphere and performance are fantastic

===============================
Rotterdam 15th October 2003 by Liz Tray
So I thought I was doing 8 gigs on this tour? then I had an attack of madness and decided to go to Rotterdam one day before the gig. Smart move. I went to Copenhagen last week and had a fabulous time, my senses dazzled by this stage show and hearing Reality live plus the wonderful company of so many Bnetters.

Yesterday was better. Everything: it was more polished, the set list was more varied and the running order and flow of the show is down pat (after only 5 gigs no less!). We got there late so ended up about 10 rows back on the left. It?s funny to me now how that seems miles away. Before Poughkeepsie I?d seen each db gig from the back of a stadium and now, I admit, I?m totally spoiled!

I guess the one thing I was after, unattainable you might say when you went to Pough and Riverside, was surprises. Even having seen the show last week I still wanted them. Second song in? Jean Genie. And then Fashion. And then Try Some, Buy Some. First performances on the tour. Well, that?s sorted!
I was delighted that so many of the audience knew the Heathen songs, maybe I shouldn?t have been surprised. It is db?s highest profile and impact album in years. Slip Away has really become the great anthem from it for this tour…
Set list… well, we all have our opinions on it. Personally I?m over it: I could, as could you, choose a 50 song set list not played last night or any other on the tour. But what has been chosen fits completely with the band, the surroundings, the new album? I?d be happy if Reality was performed in entirety every night.
Having said that there were tunes that just about took the high roof off the Ahoy in Rotterdam: Suffragette City (brilliant as ever), Changes, China Girl, Ashes to Ashes, Let?s Dance etc. I was thrilled to hear The Motel (never heard it live before) and an exquisite Tibet gig style version of Loving the Alien.

Having never travelled to see db live outside England I wondered if there was a point where I?d get fed up of hearing the same songs. After 4 gigs so far this year I can only say bring it on! I?m getting more excited with each passing show and feel a bit like a runner on starting blocks waiting for the gun to go off? next stop Frankfurt!