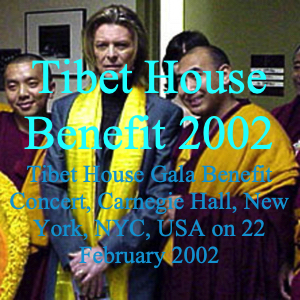 Tibet House Annual Benefit Concert, under the guidance of artistic director Philip Glass, to inaugurate the Year of the Water Horse.

In a emphatic statement that Manhattan is back to normal and prepared to give back to the world, Ray Davies, David Bowie, Patti Smith, and Beastie Boy Adam Yauch shared a New York stage on February 22 for the 14th annual Tibet House Freedom gig. The lineup at Carnegie Hall also included Brazilian star Bebel Gilberto, Tibetan flutist Nawang Khechog, rising star Mark Anthony Thompson (aka Chocolate Genius), the Drepung Monastery Monks, and the Kronos Quartet.

The concert was organised by composer Philip Glass, who, speaking about the Chinese occupation of Tibet, stated, “I once looked at the Berlin Wall and could not imagine that it would ever fall. Tibetan Culture teaches that nothing is permanent, and I imagine the Chinese will find the world will be an entirely different place in 25 years.”

The enigmatic Davies, a surprise last-minute guest, performed “Celluloid Heroes” and a Carnegie-kicking “All Day And All Of The Night” – which left Glass, who had bravely volunteered to follow the Kinks frontman, waiting a full five minutes for the applause to die down.

Bowie later emerged onstage sporting a Station To Station haircut and offered a sensitive new ballad titled “I Would Be Your Slave” before – in the true vision, style, and audacity that only Bowie possesses – he delivered a stunning interpretation of “Space Oddity,” complete with Glass on piano, Yauch on bass, and an octet of strings that included Martha Mooke and the Kronos Quartet. To top it off, all this was expertly conducted and arranged by Tony Visconti.

The Tibet House benefit has long been a launch pad for relatively unknown artists, and this evening was no exception, as Chocolate Genius began the show with a breathtaking acoustic version of Bowie’s “Soul Love.” Gilberto then performed two songs before being joined onstage by Davies, who accompanied her on his own “No Return.”

Yauch, a longtime vocal supporter of the Tibetan cause, showed a social awareness and intelligence not associated with the Beastie Boys until they began organising their own high-profile Tibet benefit shows later in their career, lambasting America’s “gung-ho and gun-toting” foreign policy before performing a solo “Promised Land” and an instrumental piece called “Sun Mandala” with Glass and Khechog.

As has become tradition since Allen Ginsberg’s death, final act Patti Smith recited Ginsberg’s poem On Cremation before launching into rocking renditions of “Boy Cried Wolf” and “Gloria.” Then another Tibet House benefit tradition took place for the show’s finale, as the full cast came onstage for a group-singalong version of Smith’s “People Got The Power.”

Speaking exclusively backstage, Smith said she believes the world can learn from Tibet’s non violent struggle for freedom: “I hope that people will use a night like this and think again of some of the most beautiful aspects of the Buddhist traditions of compassion and nonviolence, and use one’s full intellect and think things through.”