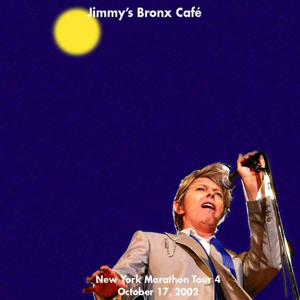 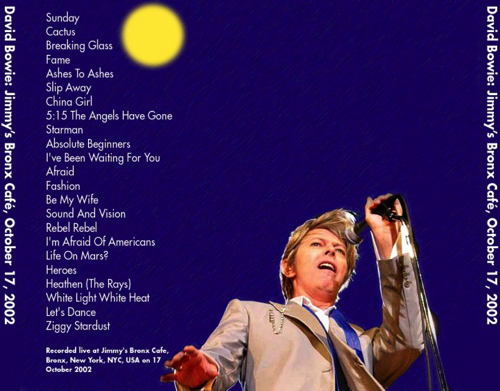 For most of a career that’s now in its fourth decade, David Bowie sought to outpace pop, fashion and his own past. He kept sloughing off styles and personas and revamping his music; more than once he declared he would no longer play his older songs. Lately, however, he has been looking back on his achievements and finding them more satisfactory, and with his current album, “Heathen” (ISO/Columbia), and on tour this year, he has allowed himself to revisit his strongest music, in which funk and noise battle melodrama.

He was all smiles when he performed on Friday night at the Snug Harbor Music Hall on Staten Island. After spending the summer playing outdoors as a headliner on Moby’s Area 2 tour, he was starting what he called the N.Y.C. Bowie-Thon: a theater-size show in each borough in the same order as the New York Marathon. (He played in Brooklyn on Saturday and continues to the Colden Center in Flushing, Queens, on Wednesday; Jimmy’s Bronx Cafe, Thursday; and at the Beacon Theater in Manhattan, Sunday).

The trappings were basic: just Mr. Bowie’s last name in lights, sometimes flashing to the beat. But as the set moved through Mr. Bowie’s lasting obsessions — space travel, apocalypse, stardom, androgyny, love and loss — it reached peak after peak.

Mr. Bowie let the audience measure songs from ”Heathen” against their predecessors from his magnificent late-1970’s albums “Low” and “Heroes” and they stood up well. “Sunday” and “Heathen” enveloped images of desolation in eerie, hovering guitar tones; “5:15 the Angels Have Gone” shifted between a mundane chronicle and a confession of desperate love. Mr. Bowie also resurrected rockers from the 1990’s — “I’m Afraid of Americans” and “Hallo Spacebay” — that remained jagged and tough.

Mr. Bowie no longer presents himself as the unearthly Ziggy Stardust or the unapproachable Thin White Duke; between songs, he joked about being jet-lagged. But at any moment, he could slip into artifice: making a Marlon Brando face when he mentioned the actor in “China Girl” shivering like a junkie in “Fame” or fixing his gaze on Ms. Dorsey as he sang the obsessive “I Would Be Your Slave”. When he ended the set with “Ziggy Stardust” he didn’t have to be in makeup and costume to claim a character who, after all, he never really left behind.