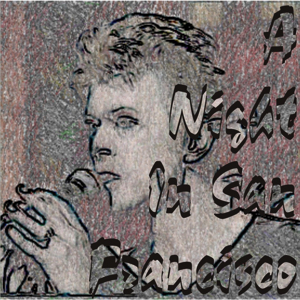 Released in September of 1995, David Bowie’s Outside album would inspire a tour that would both confuse and confound his existing fan base at the time, yet has since been re-evaluated as one of his most daring moves. It was a tour containing many of the most frighteningly intense performances of his career, and to up the ante he would invite Nine Inch Nails to co-headline. The previous year, Bowie had begin collaborating with Brian Eno again, revisiting the experimental territory they first explored during the late 1970s on Bowie’s now famous Berlin Trilogy of Low, Heroes, and Lodger. In many ways these albums, which contained proto-industrial elements and the searing guitar work of Robert Fripp, were a precursor to Nine Inch Nails, so road working it together wasn’t as outrageous as it may have seemed to fans of both camps at the time.
Outside was essentially a concept album, revolving around the story a detective on the hunt for an art killer. It was a tale of murder in a noir setting and was clearly more artistic than anything Bowie had attempted for a long time. It also embraced an angrier industrial pallet of sound for Bowie, and by 1995, Nine Inch Nails, who were riding high on the success of The Downward Spiral, had become the absolute masters of the raging industrial sound. With singles like “Closer” and “Hurt” now embraced by the alternative scene as well as MTV, they were arguably more popular than Bowie at the time. However, front man Trent Reznor reportedly felt uncomfortable having one of his major influences open, so they developed a program that featured Bowie and his band members joining NIN toward the end of their set which would then directly segue into Bowie’s set without a break or intermission. Bowie would recruit into his band two key collaborators from the ’70s and ’80s, guitarist Carlos Alomar and pianist Mike Garson, in addition to guitarist Reeves Gabrel, a critical element in the sound of Bowie’s early 1990s project, Tin Machine. Together, they were a serious force and Bowie, who many now perceived as lost in a sea of commercial trends, had suddenly becoming relevant again while rebelling against his own superstardom.
The Outside/Dissonance tour began on September 14, 1995 at the Meadows Music Theatre in Hartford Connecticut and pummeled its way across the country. One of the most memorable performances of the tour occurred five weeks later when the tour landed at the scenic outdoor Shoreline Amphitheatre in Mountain View, CA. Here we present the Bill Graham Archive master recordings of David Bowie’s performance from that legendary night. The recording actually begins toward the tail end of the Nine Inch Nails set, with the hauntingly atmospheric guitars and rumbling drums of “Subterraneans.” Featuring Reznor on sax and Bowie improvising lyrics unrelated to the track, this segues directly into Bowie’s “Scary Monsters,” with Bowie and Reznor trading verses amidst pummeling drums and screaming guitars. The two bandleaders also share vocals on the more haunting “Reptile” which follows, fueled by dissonant synth work and chugging slow-paced rhythms.
They then head in the opposite direction with new Bowie material in the form of “Hallo Spaceboy,” a frenetic rush of swirling guitars and synthesizers, industrial percussion, and pounding bass to end the Nine Inch Nails portion of the show. Reznor remains on stage for the transition song, which finds Bowie presenting his own interpretation of the NIN song “Hurt.” Given a slower arrangement and now featuring the duel guitars of Reeves Gabrel and Carlos Alomar, this is a highly intriguing performance that serves as a final collaboration between the two groups before the launching point for Bowie’s set proper.
Bowie and his band continue with the upbeat Lodger track, “Look Back In Anger,” featuring outstanding melodic piano work from Garson, while the charged up guitars and steady rhythm from drummer Zachary Alford propel the song along. Over the course of the next hour plus, Bowie and band explore material from Outside as well as several choice back-catalogue songs. The next four-song sequence, which includes “I’m Deranged,” “The Heart’s Filthy Lesson”,” The Voyeur Of Utter Destruction (As Beauty),” and the title track, “Outside,” gives listeners a heavy dose of the new material, which features plenty of dark eerie vocalizing from Bowie and throbbing and often searing instrumental work from his band. The new album will be further explored later in the set with Bowie singing his abstract lyrics over the pulsating electronic throb of “We Prick You” and the dark atmospheric imagery of “A Small Plot Of Land.”

Some of the more surprising older material to surface here include new electronic-laden arrangements of the Hunky Dory track, “Andy Warhol” and the title track to his 1970 album, The Man Who Sold The World, sung with a sense of world-weary introspection. Fans of the original Berlin Trilogy will also be intrigued with the wailing incarnation of “Breaking Glass” from the Low album found here and the rumbling “Joe The Lion” from Heroes, songs previously not explored on stage.
The set continues building right to the end, with the growling guitar riffs of “Nite Flights,” followed by a fantastic duet vocal by Bowie and bassist Gail Ann Dorsey. On “Under Pressure” Dorsey admirably plays double duty, not only maintaining the famous bass line, but taking on Freddie Mercury’s demanding vocal parts as well. The set concludes with another Scary Monsters track, a scorching guitar-fueled take on “Teenage Wildlife,” which Bowie had never performed live prior to this tour.
Despite the innovative nature of this touring concept and remarkable performances from Bowie, reactions were generally mixed. A good portion of Bowie’s older fan base didn’t embrace Nine Inch Nails industrial mastery and many younger NIN fans were long gone prior to the conclusion of Bowie’s set. To Bowie’s credit, he was well aware of the risk he was taking.
With this tour, Bowie was intentionally committing commercial suicide in favor of artistic expression. He once explained exactly how to achieve such a goal in a USA Today interview, by describing this tour as his example. “You play songs from an album that hasn’t been released yet, and complement it with obscure songs from the past that you’ve never done on stage.” David Bowie has always been a master of self-reinvention, and this performance clearly captures one of his most daring and challenging moments as a performer.