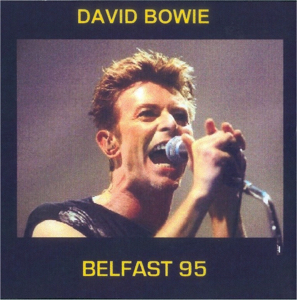 Label : No label
Audio Source : Audience recording
Lineage : tape
Taping Gear : Unknown
Taper: Unknown
Recording Location: Unknown
Total running time : 1:44:37
Sound Quality : Much noise ,dull ,but still good listened to
Attendance : 5.500
Artwork : Yes
Note :I’ve got two recordings of this gig, both about the same sound quality, which is rather muddy. One fesses-up to being a rip from the https://www.davidbowieworld.nl/mijn-bootlegs-2-2/tour-recordings/1995-the-outside-world-tour/attachment/david-bowie-belfast-1995-front/ (q.v.) – I have a hunch it may be the case with both of them. Not great

Voyeur of utter destruction > “This is a song you know from Outside and it’s called….”

Posters advertised “The Outside Tour” for Thursday 23 November 1995 – but the show was actually postponed to 5 December.
Morrissey had been touring with Bowie as his warm up act – and to promote his Southpaw Grammar album.
But The Smiths frontman found himself playing to venues half-filled with Bowie fans waiting for their idol, so two weeks into the tour he pulled out.

Shows in Belfast, Sheffield and Manchester were cancelled and Bowie had to find a replacement, turning to The Gyres, Echobelly, Placebo and a variety of local bands.
The stage design was modest in comparison to Bowie’s previous theatrical tours, with mere sheets draped about the stage.
Tickets were £25 and this was the setlist: 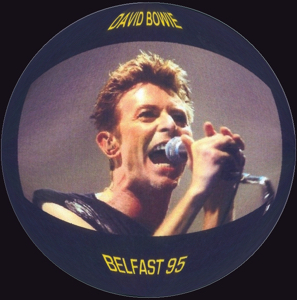