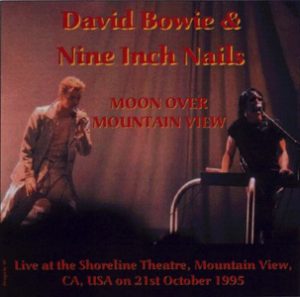 This is the same gig at the “A Night In San Francisco” bootleg (q.v.), but features the full gig from both bands. 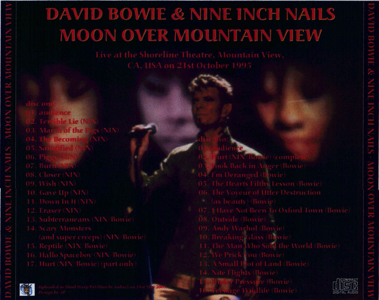 Nine Inch Nails, David Bowie moon over Mountain View.
Publication: Knight Ridder/Tribune News Service Publication Date: 23-OCT-95
Author: Perry, Claudia
COPYRIGHT 1995 Knight-Ridder/Tribune News Service
MOUNTAIN VIEW, Calif. _ Although fiercely entertaining, the Nine Inch Nails-David Bowie show at Shoreline Saturday night had more than its share of technical weirdness.
During NIN’s set, leader Trent Reznor spent almost as much time performing as he did smashing equipment, hurling full water bottles at the black-clad technicians and displaying his newly toned buttocks to a film crew and various photographers.
Oddly enough, Reznor’s crankiness didn’t really detract from the show. He’s less a whiner than a perfectionist, which made Saturday’s potential train wreck quite entertaining. When one of the keyboards delivered sounds that resembled a colicky robot, Reznor flung it away. Guitars, microphones and even band members were subjected to the same treatment.
NIN spent most of its set hammering home the relentless industrial groove that has made it a platinum-selling band. Reznor and his band kicked things off with “Tell A Lie” from “Pretty Hate Machine.” During the tune, Reznor tossed a few profane phrases at the camera people, and turned his back to them as often as he could.
The set marched on, highlighted by a sharp version of “Closer,” one of NIN’s biggest hits. By then, Reznor was drenched in sweat, his hair plastered to his head. Too many hearings of the sanitized radio version can make you think it would be easy never to hear “Closer” again. Reznor restored the song’s power with his performance.
Besides his concerns with the equipment, Reznor also seemed peeved that the audience wasn’t sufficiently enthusiastic. This critic had seen a rowdier crowd at the Boston show, but didn’t feel the Shoreline throng needed their pulse checked or anything. It could be that Reznor was used to audiences who were there mainly to see his show. It was clear Saturday that quite a few people at the big Mountain View tent wanted to see Bowie.
When Bowie came on stage to the strains of “Warszawa,” he was greeted warmly. Clad in a multilayered Issey Miyake clothing event, Bowie intoned the lyrics from “Scary Monsters” in a style that was sort of Goth Bing Crosby (one of Bowie’s old duet partners). In the blink of an eye, the tune revved up with Reznor supplying backup vocals and few keyboard wallops. Aiding and abetting on the tune was longtime Bowie sideman Carlos Alomar, as well as NIN band members Chris Vrenna, Robin Finck, Danny Lohner and James Woolley.
Bowie and Reznor joined forces on NIN’s “Reptile,” as well as “Hallo Spaceboy” from Bowie’s new album, “Outside.” The collaboration ended with the duo trading vocals on NIN’s “Hurt.” After that, the backdrop rose and Bowie’s band kicked off his set.
The month since this tour began has made all the difference in Bowie’s performance. The tour’s first show, Bowie’s first live performance in close to five years, was somewhat listless, probably due to the fact that most of the audience wasn’t familiar with the songs on “Outside.” Bowie also has softened his hard-line stance that this tour was about promoting “Outside” and nothing else.
The best example of this Bowie’s performance of “Under Pressure.” Bassist Gail Ann Dorsey went to church with her backing vocals, turning a slight hit into something rich and fine.
Bowie grouped some old songs together in the middle of his set. “Andy Warhol,” “Breaking Glass” and “Man Who Sold the World” all had their moments. “World” almost had a touch of
Marlene Dietrich in Bowie’s languid delivery.
Some of the songs from “Outside” also sounded as though they had gotten a groove transplant. “The Voyeur of Utter Destruction (As Beauty)” has picked up considerably from the beginning of the tour. However, “Small Plot of Land” remained logy and indecipherable. The only thing that saved the song were Mike Garson’s jagged, crashing piano figures. Garson was featured on Bowie’s 1973 album “Aladdin Sane.”
Bowie’s set ended with an old song, “Teenage Wildlife.” As the tune drew to a close, Bowie clutched his stomach, and fell to one knee. He raised up slightly and put his hand up as if signaling drummer Zach Alford to stop. Alford did. The crowd cheered, expecting an encore, but the lights came up and that was that.
It doesn’t take a genius to see how much NIN’s precise industrial rantings owe to Bowie’s multiple musical identities, particularly the Bowie of the “Low-Heroes-Lodger” period. Seeing Reznor and Bowie collaborating was a charge that won’t soon be matched.