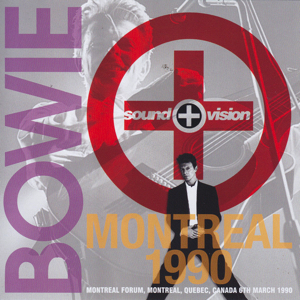 We’ve got something special going on here with the Montreal Forum. On the SERIOUS MOONLIGHT TOUR in 1983 db played 2 nights there on July 12 & 13, 1983. I just gave you complete soundboards of those 2 shows. The July 13, 1983 show is one of the most widely released db unofficial recordings.

Then we move to the GLASS SPIDER TOUR in 1987. db played 1 night at the Montreal Forum on August 30, 1987. That show has been OFFICIALLY released. It became official in terrible “official” quality when the Glass Spider DVD was finally released a few years ago. The video is from Australia but the bonus CDs were this Montreal show. Fortunatly, the show was remastered & sounds A LOT better in the recent “Loving the Alien 1983-1988” box set.

Then we move to the SOUND + VISION TOUR in 1990. db played the 2nd night of the tour there for 1 performance on March 6, 1990. That is now presented to you here in another soundboard recording. It’s great to have such an early show to hear things a bit rough around the edges. Songs like Golden Years, Panic in Detroit, Alabama Song, John I’m Only Dancing & Panic In Detroit were dropped or just rarely played as the tour progressed. It’s also great to have db’s voice still intact before he started yelling through most shows.

The Montreal Forum was shut down in 1996 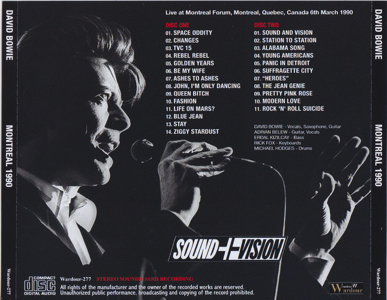