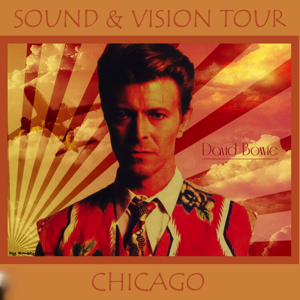 Pretty good recording from David Bowie’s “Sound and Vision” greatest-hits tour. No surprises, setlist-wise, other than the “Jean Genie/Gloria” medley he performed at this point in the tour. There are a couple of tape flips that are noticeable during the recording; the beginning of “Suffragette City” is clipped, resulting in a few lost seconds, and the opening of the second set (“Sound and Vision“) features the same chaos evident on many recordings from the tour — the band returned without fanfare with all of the lights on to begin the second set, and you can hear the taper scramble to stealthily resume the recording without being noticed under the glare of the lights. 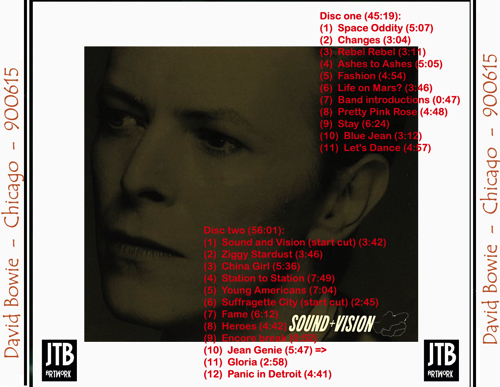 Local musician Jason Narducy
After a three-night stint at Rosemont Horizon Arena (now Allstate Arena) in 1983 and a two-night stint there in 1987, he came back in 1990 for two nights at Tinley Park’s World Music Theatre (now the Hollywood Casino Amphitheatre). Local musician Jason Narducy, who played in Chicago bands Verbow and Verboten and is now featured in national acts Bob Mould Band, Superchunk and his own project Split Single, recalled that show, saying, “[My friend] and I spent a week’s worth of pay from our summer jobs to get 10th-row tickets at the outdoor arena.” He remembers Bowie’s unique stage setup and lighting rig. “Twenty-six years later I still don’t know how he did [such a great show],” he said. “What was striking to me about his career was how he seemed to handle everything with such grace and poise.” Bowie also returned to Tinley Park to the New World Ampitheater on the Dissonance Tour with Nine Inch Nails in 1995.