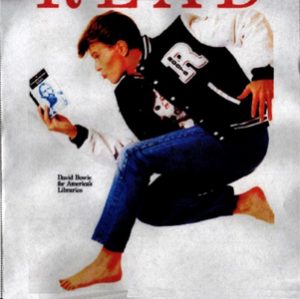 Bowie gets humorous after Blue Jean. He borrows Carlos Alomar’s guitar, claiming as he introduces I Wanna Be Your Dog, that Peter Frampton doesn’t know the chords and proceeds to teach him the song.

David Bowie’s legacy lives on in UNC historyDuring the late ‘80s and early ‘90s, the Smith Center served as a concert venue, hosting top names in rock, pop, rap and country. Artists from New Kids on the Block to Public Enemy have played there.

Since news of Bowie’s death appeared, more than 100 million Facebook tributes and posts have been penned about him, including those by musicians who admired his work and members of the LGBT community who credit Bowie for saving their lives.

Those who saw him perform in the Smith Center are now reflecting on the experience.

Jimmy Taylor was a senior at UNC when he and a group of friends saw Bowie in 1987.

“I remember it being a pretty great show,” he said. “It’s not every day you get to see David Bowie.”

The show sold out and the place was packed. Guitarist Peter Frampton and Toni Basil accompanied him on stage.

Bowie first made his appearance by descending from a giant canvas-like spider and then performed several new songs as well as favorite hits. The Daily Tar Heel reviewed the show, calling it “spectacular.” The review said after the show, the audience screamed for more, which led to the inevitable encore including “Blue Jean” and ending with “Modern Love.”

John Brackett, a lecturer in the music department, said by the late 1980s, Bowie had nearly 20 years of music behind him.

“He was firmly entrenched in the rock canon,” he said.

By that time he had also solidified his place in pop culture and had become a more accepted musician, even making his way into UNC nightlife.

“If you went to a few frat parties, you would probably hear his songs at some point,” Taylor said.

Jon Wilson, who has seen Bowie four times, attended his second show in the Smith Center in 1990 after putting on a fake British accent and stowing away on a bus from Charlotte that included contest winners. He was eventually caught but was allowed to attend the show anyway and even had his ticket upgraded.

Wilson said Bowie’s Sound + Vision Tour was thought to be his last.

The show was very technically advanced for the time. Wilson recalled it being flashy and technical with a huge screen and LED lights. Bowie opened with “Space Oddity.”

He said the crowd was great, despite tickets remaining for the show.

Wilson said Bowie told the crowd, “Next time, we’ll come through when the kids are here.”

Wilson admittedly cried when he first heard the news of Bowie’s passing.

“He’s just been a soundtrack for so many moments for different people,” he said. “He’s got a song for everything.”

Wilson said he believes the album, as well as the song “Lazarus,” was a goodbye to his fans — a send-off.

In the first line in “Lazarus,” Bowie sings, “Look up here, I’m in heaven.”