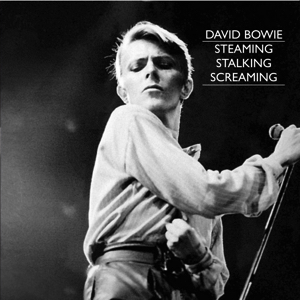 The audience are very restless,and again they are constantly showering Bowie with frisbees,flowers and streamers of toiletpaper, making it difficult for him to sing with concentration.
Du­ring Jean Genie,when a toilet roll is thrown his way,he sings “he smiles like a toilet roll” instead of “reptile”. So much litter lands on the stage that the show must he stopped in the course of Beauty & the Beast in order to have the stage cleared.

Strange tiny breaks in sound in crowd noise between What In The World and Be My Wife. The three most significant removed, remainder left as is.
Volume correction on master in Be My Wife @ 1:55. Smoothed a little to reduce impact.
Abrupt join between Blackout and Sense Of Doubt (the first half of which is missing) is on source tape.
Cut between Beauty and the Beast and Fame is on source tape, just tidied up a little.
Ziggy Stardust cuts out at 1:30 – fade-out.
Gap removed @ 7:48 in Station To Station – some music lost. Further gap removed in crowd noise between Station To Station and Stay (encore break) – note that timbre of sound is different after this break.
Two tape pauses removed from crowd noise between TVC 15 and Rebel Rebel

Note that this is a different recording from that in the “Breaking Glass” bootleg.