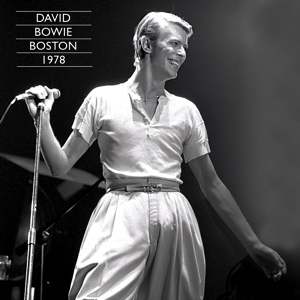 Warszawa and the first half of “Heroes” are missing, which is the reason why it lasts only 95 minutes. For the rest this is a perfect tape,loud and clear stereo sound and a fine atmosphere,due to the fact that the enthusiastic audience can be heard quite clearly.
During Jean Genie Bowie worked the crowd up to such a frenzy with his constant urging to “Let yourself go!” that two girls took off their clothes until they were topless: the Bostonian police at once removed them from the hall!
“Good evening,we’ll be back in ten minutes time. Nice to be here” Bowie says after Fame,and after TVC15 he says twice “Thank you”,these are all the words Bowie speaks.
Rebel Rehel gets a somewhat cumbersome ending; it sounds as thuugh there was some misunderstanding between Bowie and the band as to when to end the number. for when the band play the final tones Bowie just continues singing,so that they have to go on playing. And, conversely,when Bowie sings his final tones the band simply play on,and Bowie has to adjust,and sings some additional lines! So it is only after a while that they come to an end!

During the concert two large,inflatable beach-balloons kept bouncing around on top of the audience,and right at a climactic point during one of the songs it floated up to the titage, and Bowie hit it with his fist,lhe same time hitting a long,powerful note. A dynamic piece of improvisation which made a great impretision on the 15,500 headed audience in this brim­full Boston hall. It is quite probable that this incident inspired Bowie to use the globe balloon which he was to intro­ duce five years later in his Serious Moonlight Tour .