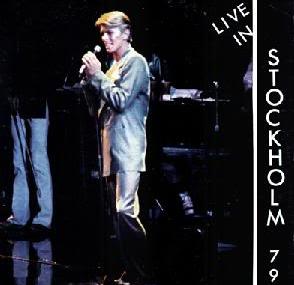 Bowie wearing a blue suit instead of the plastic pants or the flapping white ones.
Great Tape

=============================
AllMusic Review by Alex Henderson
Countless David Bowie bootlegs flooded the underground market in the ’70s, and the sound quality varied considerably. Some had lousy sound quality — back then, it wasn’t uncommon for bootleggers to put out a live recording that had been made using a mono home recorder. But others were stereo soundboard recordings that actually sounded good. Decent stereo sound is heard on Live in Stockholm ’79, a two-LP bootleg that was put out by the German DCR label. The concert was recorded in Sweden’s largest city during a 1979 tour of Europe, and Bowie was in the middle of what has been called his Brian Eno Period (an experimental, rewarding period that found him using a lot of electronic instruments and working with producer Eno on his albums Low, Heroes and Lodger). Bowie offers a lot of songs from the Eno Period, including “Be My Wife,” “Blackout,” “Beauty and the Beast,” “Breaking Glass,” “Speed of Life” and Heroes’ title song. But he also provides the funky “Fame” (this set’s only song from Young Americans) and early-’70s favorites like “Hang on to Yourself,” “Suffragette City,” “Jean Genie,” “Ziggy Stardust” and “Soul Love.” Another highlight of this bootleg is a cover of the Doors’ eerie “Alabama Song (Whiskey Bar),” which works perfectly for Bowie. When Live in Stockholm ’79 was circulated in the U.S. in 1979 and the early ’80s, it generally sold for around $10. But if a rare copy happened to surface at a vinyl convention in the ’90s, chances are it was sold for a lot more.