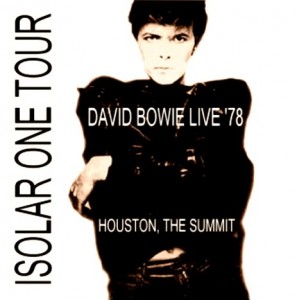 Great show, well circulated, this copy is low generation, reputed to be from the master to the person I got it from, so posted as 3rd generation.
This is one of my favorite shows from the 1978 tour along with Nashville.
Great versions of Rock N’Roll Suicide and “Heroes”.

note by Pim Jal de la Parra:
Great tape,
for its quality is so good that Bowie’s singing as well as all the instruments can be heard with great clarity. The numbers are played to perfection,apart from a minor mistake by Adrian Belew in Be My Wife. The audience in this arena are exultant, and after Jean Genie a man calls out encouragingly “Allright baby, allright!”.
“I’d like to introduce you to the members of my band. On piano Sean Mayes. On electric violin Simon House. On rhythm guitar Carlos Alomar. On percussion Dennis Davis“. Upon his introduction,Dennis strikes a cymbal. “What’s that again?” asks Bowie,and Dennis replies by another sroke on that cymbal. Laughing,Bowie continues: “Haha,on bass guitar George Murray, on hundreds of synthesizers,haha,Roger Powell. And on several guitars,Adrian Belew“. Then he tells the audience that he is going to play songs from the Ziggy Stardust LP. For many people Ziggy Stardust remains the best LP,so the,audience’s response is overwhelmine. When Bowie sings “Pushing through the market square” the audience go absolutely out of their senses! A man – totally overwhelmed – says “Oh.no!” ,evidently unable to believe what is happening to him.
Just before Stay starts , a man calls “Eno ,hey Eno!”; probably like the other man in San Diego,he thought Eno was on stage. Then starts an excellent version of Stay ,played with vigour, slightly faster than usual.