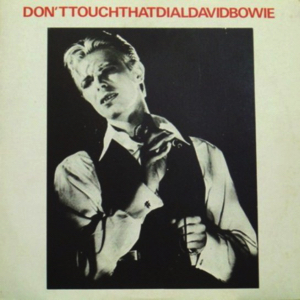 Originally released in Japan by a Japanese label, Marc, as “Don’t Touch That Dial”, with a single production run of 2,000. Japanese law at the time allowed the production and sale of any LPs by non-JASRAC artists, so long as the recording had been made before 1978. Thus, the original Marc release was perfectly legal under Japanese law

” it is a good sounding audience recording for the era. The performance is excellent and is great fun to hear, with Bowie in great voice and jovial mood (drunk again!) Tony Kaye really shows his class on this too. […] It’s a shame the intro to Station To Station is cut as Stacey Heydon was a class act and really did a magnificent job on it. Several tracks are missing but that’s the way with boots of this era. I remember DB created the howling effect at the end of Diamond Dogs by standing on the edge of the stage and swinging his microphone Roger Daltry style in front of the PA stack to get the feedback on every pass. Too funny.”

Quality: A Side good / B Side good