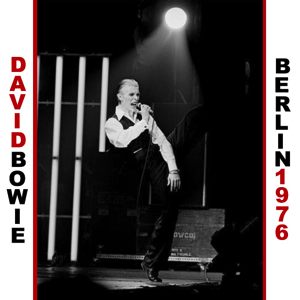 There is an interesting moment in Station to Station . Bowie comes on and the moment arrives when the band expect he will start to sing,but Bowie lingers for a while,causing a short spell of confusion in the band,a blind spot in the numher. But the band soon recover and Bowie starts singing. “Here – you – ean stay” he sings in Stay and then “You-you-you-you-you”, speeding up the tempo,like a starting train. Bowie introduces TVC15 with the words: “This is a very romantic love song between a girl and a television seL,it’s called TVC15,haha”.

Matrix of 2 different audience recordings from the same show.

The recording is missing the last track (Rebel Rebel) and Panic In Detroit, TVC 15 and Diamod Dogs are cut before the end.
Also Changes has a cut in the middle.
Compared to source 2 the speed was approx. 4 % slower. I decided to adjust the speed to source 2 as this tape seems to be a lower gen.
The sound of the tape is quite inferior (middle frequencies dominating) to the well balanced sound of source 2.

The original recording is missing the first 3 songs and the first half of Word On A wing. This first part of the concert on the bootleg is obviously taken from the source 1 tape and then continued with the second half of Word On A Wing. There are 2 cuts in Panic In Detroit which could not be patched completely by source 1. So this track is stil incomplete (missing approx. 2 minutes of drum solo). There are some small cuts between tracks. The recording has some hiss at lower sound levels which I tried to remove as much as possible.
The sound of this is much better than that of source 1, especially a nice bass is present.

The last track of the concert, Jean Genie, is missing on both sources.