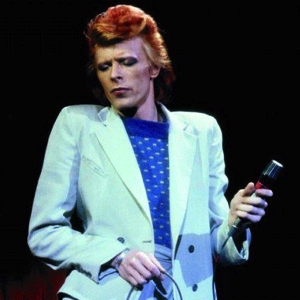 This is the third concert of the Soul Tour,but already Bowie is hoarse.
“Hmm,Madison,good evening” he says during Rock & Roll With Me,“it’s a pleasure and a privilige to be here. Thanks for having me”. Bowie Announces the new numbers of the Young Americans set: “Here are some very new songs. We’ve just recorded them. And they’re for an album that won’t be out until next year,so we’re gonna play them for ya now. This one is called Young Americans”. And Can You Hear Me: “This song is for girls. Yes,here’s a love song. I don’t write many love songs”. At the beginning of Rock & Roll Suicide Bowie says: “This is the first time that we’ve been here,and we’re coming back,haha!”. The audience cheer,but on the whole one cannot hear much of the audience : This tape has a rather direct sound. “You’re not alone,helieve it” Bowie sings,and gets visibly emotional. “All you gotta do is win! Win! Loose? Win ,yeah!” he sings passionately,and at the end of the song he calls out “Oh you’re wonderful,I bless ya! I love ya! I’ll see you again soon! I mean it”. The audience applaude and the announcer says: “Ladies and gentlemen ,Mr Bowie has left the theatre”