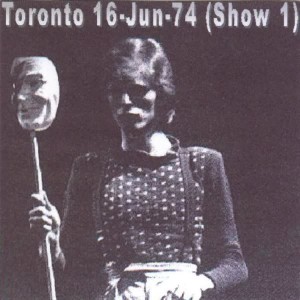 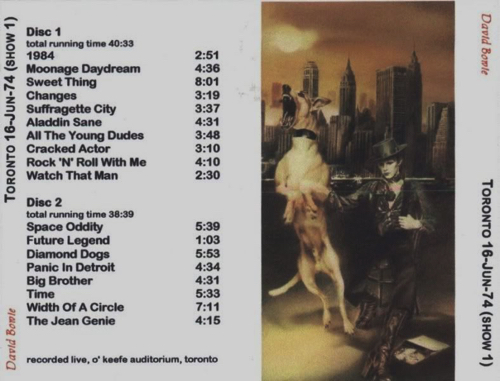 The third concert of this tour. All those of the audience who were dressed as Ziggy felt fooled. “Where is Ziggy? We want Ziggy!” they shouted. They were disappointed and would not make acquaintance with Halloween Jack. The other part of the audience,those who had come to see Bowie,and not Ziggy in particular,thought Halloween Jack smashing. It is mainly these keen ,people that one hears on the tape.
Much yelling during Sweet Thing when Bowie appears in a trenchcoat high above the stage on a movable catwalk. For Suffragette City Bowie had invented some dance-steps performed sitting on chairs,by himself and the two backup singers,Gui Andrisano and Warren Peace. For Aladdin Sane there was mime with a Japanese mask with the Aladdin Sane lightning bolt on it. For Cracked Actor Bowie wears a red cape and goggles. Sitting on a stool he sings to a skull while the two ‘dogs’ are taking shots of him and are powdering his face as if he were a filmstar. Drive in Saturday is done in an acoustic version with only Bowie playing the guitar and David Sanborn the saxo­phone. During Space Oddity he sits in a chair and is raised over the heads of the audience by the lever of a kind of lift truck. Singing through a red telephone micro “For here am I sitting in a tin can”,Bowie is sitting in his chair while the audience are looking up in amasement. After Space Oddity a tape is played with Future Legend,which develops in Diamond Dogs. Gui Andrisano and Warren Peace tie Bowie up with ropes and the same ropes are used to form a boxing ring for Panic in Detroit. At the beginning and the end of the song a tape is run which con­tains hysterical,panicky screaming. Bowie puts on boxing Gloves ,steps into the ring and fights his way trough the panic. For Time a large box covered with mirrors ,a a glass asylum. The box sprang open and a huge black hand covered with diamond glitter appeared. The hand moved down and there was Bowie, singing, sitting in the palm of the hand. In Width of a Circle Bowie performs his well-known act from the Ziggy days.
This is what the Diamond Dogs show looked like; a terrific show which left all the spectators – excepting the disappoin­ted Ziggy Lookalikes – full of amasement and admiration.