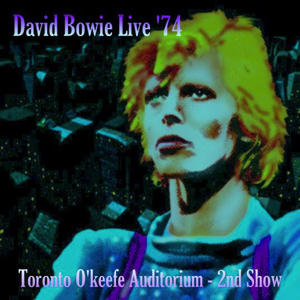 This is nearly the complete late show from 16 June 1974.
As far as I’ve ever heard, the master tape lacks the end of “Jean Genie” and the following number, “Rock ‘n’ Roll Suicide,” which concluded the show.

This is an average audience recording for the time — very rough but listenable. Bowie had laryngitis that evening, but there are few indications of this in his performance. (Note that during “Aladdin Sane,” he tries to avoid the high notes
that gave him some problems during the early show.)

I’d love it if someone would seed the COMPLETE tape of the early show from this same night. The commonly circulating CDs
all seem to lack “Drive-In Saturday,” which appears on the 2-LP vinyl bootleg, “Halloween Jack Spooks ’em in Toronto.”
That boot features the complete first show except for “Rock ‘n’ Roll Suicide” and a large cut in the middle of “Watch That Man.” According to “David Bowie:
The Concert Tapes” by Pimm Jal de la Parra, “Rock ‘n’ Roll Suicide” was recorded at the first show, but it is not part of any bootleg I’ve ever come across. (The cut in “Watch That Man” presumably appears in the master tape, although P. J. de la Parra does not mention it.)