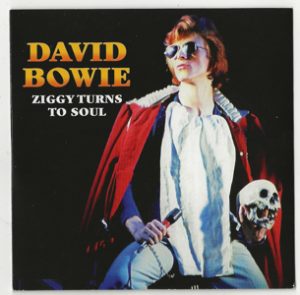 David starts playing Changes ,but then suddenly stops: “Still don’t know what I was waiting for,and my time was run­ ning wild … I wanna do a fast one … Panic in Detroit”. He gives the band a sign and Earl Slick starts.
Then Changes af­ter all; lots of hysterical screaming of the audience during this song. They are wildly enthusiastic and clap along with many a song,which lends the tape a fine atmosphere.

Al­ though this is the last part of the tour,Bowie’s voice is still powerful. Rock & Roll With Me he sings beauti­fully,and halfway the song he explains to the audience what it is about: “This is called When You Rock & Roll With Me, it’s about me,and singing and why people would do – getting on stage and sing. I wouldn’t he able to … you start off thinking one thing,and you would end up thinking another – the music sings for you, and kind of makes it work that way. I suppose that’s what it’s about”.

After the second leg of the Diamond Dogs tour, Bowie scraps much of the elaborate staging of the previous dates and adds a full regiment of black backing singers (including the legendary Luther Vandross) and moves the tour into its “Plastic Soul” stage, of course Bowie was also working on the Young Americans record and was fully immersed into the Philly sound. In the Five Years documentary they look at this phase of his career and while the soul sound is not my favorite period of his music it does give you an interesting glimpse to Bowie’s diverse creations.

For this final disc in the set, we finish with another Joe Maloney audience recording from the Boston Music Hall a scant four months after the previous set. The recording is similar to the July show, very good, and a bit distant that captures the atmosphere well. There are times where the upper frequencies distort and the recording gets slightly muddy at times when the band is jamming and the voices are wailing. If anything the audience’s energy level is up a notch and one could imagine dancing in the isles as they seem very into the concert. Memory Of A Free Festival is like the calling to the congregation to come on down, the ceremony is about to begin. The set list is slightly shorter, it is well documented that David was quite “medicated” on this tour. John, I’m Only Dancing gets a workout that gets the audience on their feet clapping along, yet the highlight of this tape is the pre release versions of songs from 1975’s Young Americans record. Footstompin’ was originally written by The Flairs, Carlos Alomar transformed it into Fame, as soon as they break into it the audience reacts by clapping perfectly in time. David gets a harmonica out as the band get into a soul rendition of The Beatles’ Love Me Do as an intro to The Jean Jeannie much to the delight of the audience. The versions of Can You Hear Me and Somebody Up There Likes Me sound similar to the record versions and one could surmise that the material had been recently recorded. The audiences rapturous applause brings the house down when the band encore with Diamond Dogs, a well paid and most interesting second” in Bowie’s career. 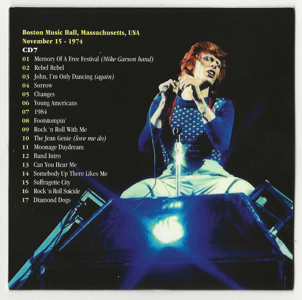 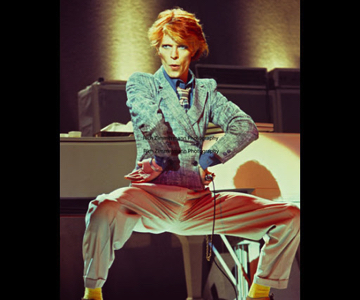 JOE’S MEMORIES:
The “chameleon” of Rock and Roll was coming back to Boston and, once again, he would be appearing in the majestic Boston Music Hall.
The Ziggy Stardust tour had been here for two performances, on October 1st and 2nd, 1972 and the Diamond Dogs “1980 Floor Show” had just been here on July 16 and now,
this was the second half of the tour, now re-named “The Soul Tour”. Originally, this was to be the first of two shows, the 15th and 16th, but due to both shows selling out so fast,
a third show was added on the 14th. After seeing the Ziggy and Diamond Dogs performances, we didn’t know what to expect at this show, but it turned out to be completely different
and just as great. And the beginning of the show was a complete surprise! There was no introduction, the lights just went down and the first song started with a nice saxophone intro.
As the vocals began, we were surprised that it wasn’t Bowie singing, but one of the back-up singers. He did an excellent, soulful version of “Memory Of a Free Festival”,
with the rest of the singers joining in for the “The star machine is coming down and we’re gonna have a party!” chorus. As the song ended, David was introduced and took the stage,
wearing high-waisted gray trousers and a cream colored silk shirt, with his hair longer and a bit more blond than before. He still had shaved eyebrows and there was a “hint’
of eyeshadow and mascara on his eyes. He looked pleased to be here and, with a big smile, started the “party” off with the Diamond Dogs single, “Rebel Rebel”.
From that moment on, it was a set that covered all the “hits”. “John, I’m Only Dancing” (from the Ziggy days), “Sorrow” (the 1960s song, by the British band The Merseys,
from the “Pin Ups” album) and “Changes” (from “Hunky Dory”;) came next, then it was time for brand new single, “Young Americans”. As the sax and “boxing ring” bell intro ended,
David took a moment to say “Hello, Good evening!” to the audience, before introducing the song. This was the first time that he had slowed down since he had come on stage.
“Young Americans” was getting heavy airplay on all the area radio stations and with everything that was going on in politics and world events, the famous line,
“Do you remember your President Nixon”, earned a big round of applause from the audience. “1984” followed, then they got the audience clapping along, with a cover of The Flairs 1961 R&B hit,
“Footstompin’”. It was back to Diamond Dogs for “Rock ‘n’ Roll With Me”, before throwing the audience a “curve”, with a new “Love Me Do” intro for the great Aladdin Sane album song,
“The Jean Genie”. “Moonage Daydream” led into two more new songs, “Can You Hear Me?” and “Somebody Up There Likes Me” before closing the set with “Suffragette City” and “Rock ‘n’ Roll Suicide”.
After a great ovation from the audience, David and the band returned to the stage and ended the show with “Diamond Dogs”. As the song ended, David said “Thank you for coming.
See you tomorrow!”, before leaving the stage for the final time. As much as the crowd wanted another song, it wasn’t to be. The last thing we heard was an “Elvis” type announcement from backstage,
saying “Ladies and Gentlemen, Mr. Bowie has left the building!”. I later read that the previous night’s show had been plagued by some sound problems and when I heard a recording of the
Saturday night show, there seemed to be quite a few off-key notes from the saxophone, so it looked like we got lucky and had seen the better of the three shows. Bowie was enjoying himself
and all members of the band, as well as the back-up singers, seemed to be at their best, with Earl Slick, on lead guitar, Carlos Alomar, on rhythm guitar, Mike Garson (from the Spiders From Mars),
David Sanborn, on saxophone and Willie Weeks, on bass, making this a most enjoyable and memorable performance.