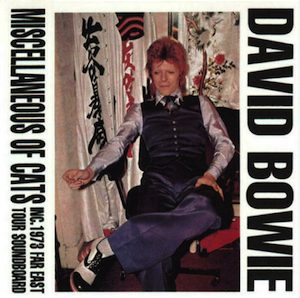 “Musically he is the most exciting thing to have happened since the fragmentation of the Beatles, and theatrically he is perhaps the most interesting performer ever in the pop music genre.” – Japan Times Review

Four bonus songs have been added, two from BBC and two together with Mott The Hoople.
It is most uncertain if Bowie participates in this live version of HONKY TONK WOMEN.

Soundwise this is a very decent audience recording of a Ziggy Stardust gig, and I would rate it at 6/9.
Furthermore there are some great highlights on this disc. Complete recordings of both Panic In Detroit and Aladdin Sane which prompted me to buy this disc in the first place.

Bowie is a current recording artist so support him by buying his official cd’s, merchandise, and take in a gig or two as
and when he tours again.